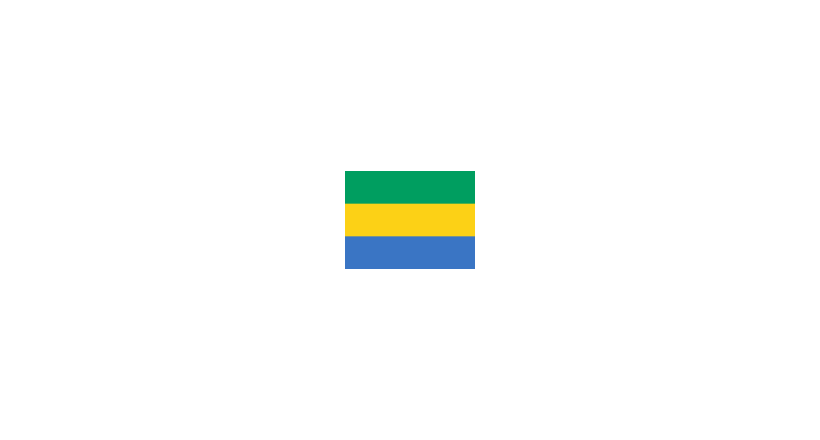 The Gabonese Republic is a country in west- central Africa bordered by the Gulf of Guinea to the west , Equatorial Guinea to the northwest, Cameroon to the north and the Republic of the Congo to the east and south. It has an area of ​​approximately 270,000 km 2 and an estimated population of 1,500,000. Its capital and largest city is Libreville .Since independence from France on 17 August 1960, Gabon has ruled three presidents. In the early 1990s, Gabon developed a multiparty system and drafted a new democratic constitution that allowed for a more transparent electoral process and the reform of many government institutions. Small population density combined with abundant natural resources and private foreign investment have helped make Gabon one of the most prosperous countries in the region, with Gabon's human development index being the highest in sub-Saharan Africa . The name Gabon originates from Gabo , the Portuguese "cloak", which is almost the shape of the mouth of the Kama Libreville River .

The first inhabitants of the region were the people of Begumi , but with the migration of the Bantu people to the area, they became more numerous until they eventually replaced them. There are currently many tribal groups in the country, the largest being the Fang peoples, who make up 25% of the population.

The first Europeans (Portuguese navigator Diego) arrived in the region in the 15th century. The current name of the country is the Portuguese name "Gabao", which is derived from the Arabic word "Quba" and has the same meaning which is almost in the form of the mouth of the Como River at Libreville . The Dutch arrived in the region in 1593. The French arrived in the area in 1630. The French explorer Pierre Savorna de Braza led his first expedition in Gabon and Congo in 1875. He founded the city ​​of Franceville and later became governor of colonial power. Several Bantu groups lived in the area which is now Gabon when it was officially occupied by France in 1885 and became an autonomous republic within the French Union after World War II .

In 1910, Gabon became one of four regions in French Equatorial Africa, a union that lasted until 1959. It gained independence on 17 August 1960. Gabon's first president was elected in 1961 by Leon Imba, while Omar Bongo Ondimba was vice-president. French interests were crucial to determining Gabon's future leadership after independence. French money poured into Imba's successful election campaign.

After Imba came to power, the press was suppressed, political demonstrations were banned, freedom of expression was curtailed, other political parties were gradually excluded from power and the constitution was changed to align with French lines of centralizing power in the hands of Imba himself. However, Imba dissolved the National Assembly in January 1964 and imposed a one-party system of government, then attempted a military coup to oust him from power and restore parliamentary democracy. The dictatorial regime of Imba became synonymous with the phrase "French interests" where a French paratrooper was landed within 24 hours to restore Imba to power.

After a few days of fighting, the coup was eliminated and most dissidents were imprisoned, despite widespread protests and riots. The French government did not worry about the international condemnation of the intervention and the paratroopers remained at Camp Dougoul on the outskirts of the Gabonese capital. When Imba died in 1967, he was replaced by Bongo and remained head of state until his death in 2009.