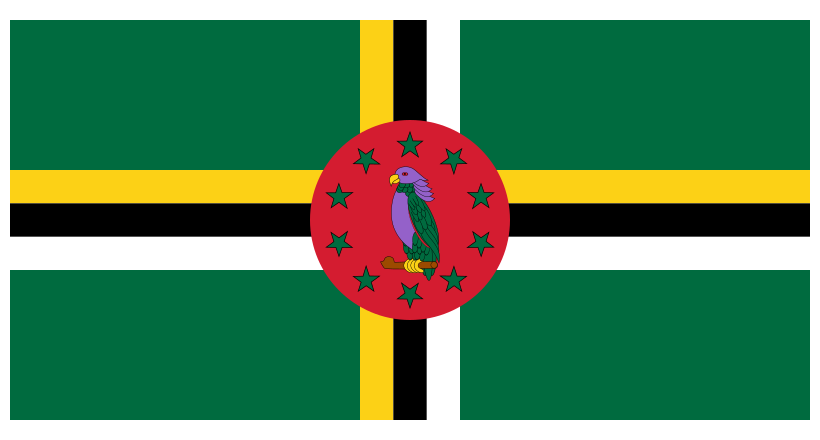 officially the Commonwealth of Dominica, is an island country in the West Indies.The capital, Roseau, is located on the western side of the island. It is geographically situated apart of the Leeward Islands chain in the Lesser Antilles archipelago in the Caribbean Sea. The island is located near Guadeloupe to the northwest and Martinique to the south-southeast. Its area is 750 km2 (290 sq mi), and the highest point is Morne Diablotins, at 1,447 m (4,747 ft) in elevation. The population was 71,293 at the 2011 census.

Columbus is said to have passed the island on Sunday 3 November 1493, and the island's name is derived from the Latin for "Sunday". It was later colonised by Europeans, predominantly by the French from the 1690s to 1763. Great Britain took possession in 1763 after the Seven Years' War, and it gradually established English as its official language. The island republic gained independence in 1978.

Its name is pronounced with emphasis on the third syllable, related to its French name of Dominique. Dominica has been nicknamed the "Nature Isle of the Caribbean" for its natural environment .It is the youngest island in the Lesser Antilles, and in fact it is still being formed by geothermal-volcanic activity, as evidenced by the world's second-largest hot spring, called Boiling Lake. The island has lush mountainous rainforests, and it is the home of many rare plants, animals, and bird species. There are xeric areas in some of the western coastal regions, but heavy rainfall occurs inland. The Sisserou parrot, also known as the imperial amazon and found only on Dominica, is the island's national bird and featured on the national flag, which is one of only two national flags containing the colour purple (the other being Nicaragua)