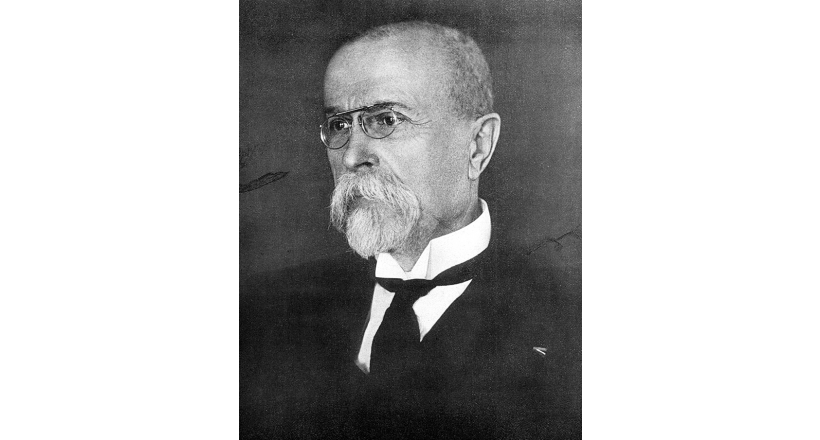 Tomáš Garrigue Masarykˈ, sometimes anglicised Thomas Masaryk (7 March 1850 – 14 September 1937), was a Czechoslovak politician, statesman, sociologist and philosopher. Until 1914, he advocated restructuring the Austro-Hungarian Empire into a federal state. With the help of the Allied Powers, Masaryk gained independence for a Czechoslovak Republic as World War I ended in 1918. He founded Czechoslovakia and served as its first president, and so is called by some Czechs the "President Liberator (Czech: Prezident Osvoboditel)

Masaryk was born to a poor, working-class family in the predominantly Catholic city of Hodonín, Moravia, in Moravian Slovakia (in the present-day Czech Republic, then part of the Austro-Hungarian Empire). The nearby Slovak village of Kopčany, the home of his father Josef, also claims to be his birthplace. Masaryk grew up in the village of Čejkovice, in South Moravia, before moving to Brno to study.

His father, Jozef Masárik, was born in Kopčany (then in the Hungarian part of Austria-Hungary). Jozef Masárik was a carter and, later, the steward and coachman at the imperial estate in nearby town Hodonín. Tomáš's mother, Teresie Masaryková (née Kropáčková), was a Moravian of Slavic origin who received a German education. A cook at the estate, she met Masárik and they married on 15 August 1849.

After grammar school in Brno and Vienna from 1865 to 1872, Masaryk attended the University of Vienna and was a student of Franz Brentano. He received his Ph.D. from the university in 1876 and completed his habilitation thesis, Der Selbstmord als sociale Massenerscheinung der modernen Civilisation (Suicide as a Social Mass Phenomenon of Modern Civilization) there in 1879. From 1876 to 1879, Masaryk studied in Leipzig with Wilhelm Wundt and Edmund Husserl. He married Charlotte Garrigue, whom he had met while a student in Leipzig, on 15 March 1878. They lived in Vienna until 1881, when they moved to Prague.

Masaryk was appointed professor of philosophy at the Czech Charles-Ferdinand University, the Czech-language part of Charles University, in 1882. He founded Athenaeum, a magazine devoted to Czech culture and science, the following year. Athenaeum, edited by Jan Otto, was first published on 15 October 1883.

Masaryk challenged the validity of the epic poems Rukopisy královedvorský a zelenohorský, supposedly dating to the early Middle Ages and presenting a false, nationalistic Czech chauvinism which he was strongly opposed. He also contested the Jewish blood libel during the 1899 Hilsner trial.