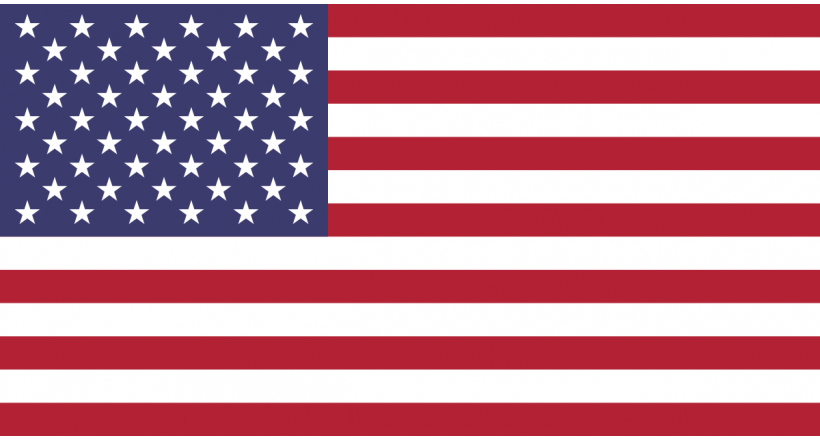 United States of America ( United States of America ) is a federal constitutional republic comprising fifty states and metropolitan areas. Most of the country lies in Central North America , with 48 states and Washington DC between the Pacific Ocean and the Atlantic Ocean, bordered by Canada to the north and Mexico to the south. Alaska is in the northwest of the continent, bordered by Canada to the east and Russia to the west across the Bering Strait . The state of Hawaii , an archipelago located in the middle of the Pacific Ocean. The state also includes many Caribbean and Pacific lands and islands.

The United States is third in terms of area (3.79 million square miles or 9.83 million square kilometers) and is third in terms of population (307 million). The United States is characterized as one of the world's most diverse countries in terms of race and culture, as a result of large migration from different countries. The US economy is the largest national economy in the world, with 2008 GDP estimated at US $ 14.3 trillion (23 per cent of the world total, based on nominal GDP and approximately 21 per cent in terms of purchasing power ).

The geographical area that currently forms the United States was settled by humans for the first time in the late or shortly after the last Ice Age , when tribes of the Mongol or Yellow Strait crossed the Bering Strait from North Asia through Alaska and headed south for life, They formed the ancestors of Native Americans . The modern European colonization began first with the Spaniards , and then moved to the English , who began to think of colonizing the areas that now form the eastern coast of the United States under Queen Elizabeth I , which occupied throughout the second half of the sixteenth century , especially after the destruction of the Spanish fleet Jabbar in the year 1588 .

The country was founded by thirteen British colonies along the Atlantic coast . The first was the English colony of Virginia , named by its explorer Sir Walter Raleigh , named after Queen Elizabeth. The pace of English settlement on the east coast increased after the emergence of companies aimed at encouraging the settlement movement in the overseas territories, which gained popularity due to economic crises, unemployment and religious persecution.Jamestown was founded in 1607 in the territory of Virginia, and was the first successful English settlement in the future territory of the United States. This was followed by the establishment of other colonies: New Hampshire , Massachusetts , Connecticut , Rhode Island , Maryland , SouthCarolina , North Carolina , New York , New Jersey , Delaware and Pennsylvania . The inhabitants of these colonies were engaged in agriculture, forestry, mining, trade and livestock, and their populations were made up of an English and a European mixture because of the influx of other European immigrants.  These colonies issued the Declaration of Independence on July 4, 1776, which recognized their independence from Great Britain and the formation of a federal government. The rebellious states defeated Great Britain in the American Revolutionary War , the first successful colonial war to achieve independence. The Philadelphia Convention adopted the current US Constitution on 17 September 1787; it was ratified the following year, making these states part of a single republic with a strong central government. The Bill of Rights was ratified in 1791 and includes 10 constitutional amendments guaranteeing many basic civil rights and freedoms.

In the 19th century, the United States acquired territory from France , Spain , the United Kingdom , Mexico , Russia , and the Republic of Texas and Hawaii. Disputes between the South Agricultural Zone and the North Industrial Area over state rights and the expansion of the slave trade led to the outbreak of the American Civil War in the 1860s. The victory of the northern region prevented a split in the country, leading to the end of legal slavery in the United States. The national economy became the largest economy in the world by 1870.  The Spanish-American War and the First World War confirmed the country's military strength. In 1945, the United States emerged from World War II as the first nuclear-armed state, a permanent member of the United Nations SecurityCouncil and a founding member of the North Atlantic Treaty Organization (NATO) . The United States became the only superpower in the world after the end of the Cold War and thedisintegration of the Soviet Union . The United States spends about 50 percent of global military spending on US forces and is a global economic, political and cultural force.