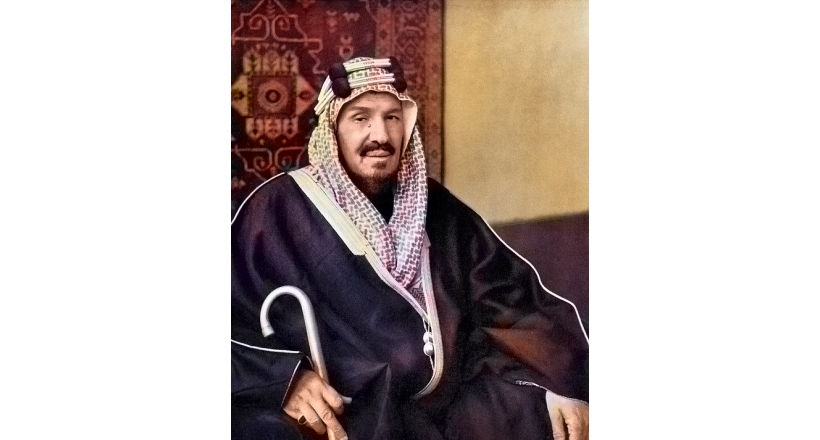 Abdul Aziz Bin Abdulrahman Al Faisal Al Saud (Dhul-Hijjah 1292 AH / January 1876, first spring 1373 AH / November 1953)  is the founder of the modern Kingdom of Saudi Arabia and its first kings. He was born in Riyadh to the ruling Saudfamily of Najd .  When he reached the age of 10, he moved with his family to Qatar  and then to Bahrain and then to Kuwait and was received by her emir Mubarak al-Sabah after the victory of the Rashid family , Rahman bin Faisal bin Turki Al Saud, the last imams of the second Saudi state . his mother, Sarah, the daughter of Ahmad al-Kabeer ibn Muhammad ibn Turki ibn Suleiman al-Sudairi.

King Abdul Aziz and his men, who numbered forty, and sixty men, were born on 21 Ramadan in 1319 AH January 2, 1902 , from Kuwait, heading to Riyadh to break into Al-Musamak Palace , the seat of the ruler.  . The plan of their entry into Riyadh, Abdullah bin Othman al-Hazani, and the restoration of Riyadh , put King Abdul Aziz the first building block in the state, and the stage of unification. The post-recovery phase of Riyadh is the most important stage in Abdul Aziz's history. He spent more than 20 years fighting and fighting on more than one front.

King Abdul Aziz is known to the Arabs as "Abdul Aziz"  and to the West (Ibn Saud)  title of the Western media in 1934 ( Otto von Bismarck ) Arabs  and ( Napoleon ) Arabs and ( Oliver Cromwell )  and (King Solomon ) new. was called in 1931 , (by George Washington ) the new nation.  He was also named after the founding of Saudi Arabia as the "leader of the Arabian Peninsula".