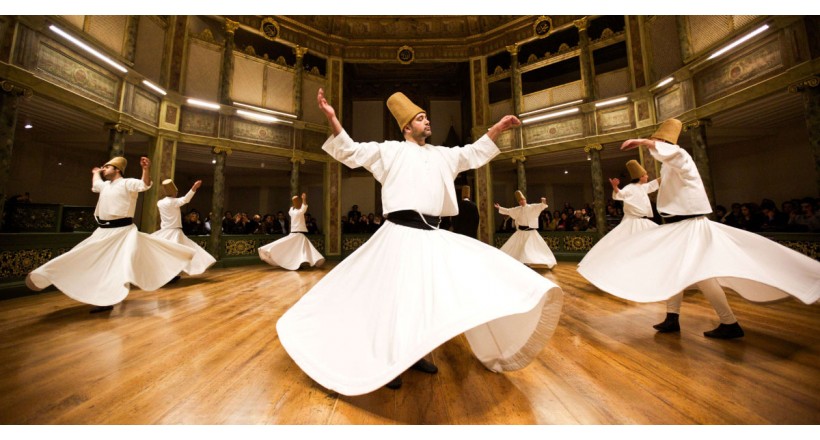 Sufism,variously defined as "Islamic mysticism", "the inward dimension of Islam" or "the phenomenon of mysticism within Islam", is mysticism in Islam, "characterized ... [by particular] values, ritual practices, doctrines and institutions" which began very early in Islamic historyand represents "the main manifestation and the most important and central crystallization of" mystical practice in Islam. Practitioners of Sufism have been referred to as "Sufis"

Historically, Sufis have often belonged to different ṭuruq, or "orders" – congregations formed around a grand master referred to as a wali who traces a direct chain of successive teachers back to the Islamic prophet, Muhammad.These orders meet for spiritual sessions (majalis) in meeting places known as zawiyas, khanqahs or tekke.They strive for ihsan (perfection of worship), as detailed in a hadith: "Ihsan is to worship Allah as if you see Him; if you can't see Him, surely He sees you." Rumi stated: "The Sufi is hanging on to Muhammad, like Abu Bakr." Sufis regard Muhammad as al-Insān al-Kāmil, the primary perfect man who exemplifies the morality of God,and see him as their leader and prime spiritual guide.

All Sufi orders trace many of their original precepts from Muhammad through his son-in-law Ali, with the notable exception of the Naqshbandi, who claim to trace their origins from Muhammad through the first Rashid Caliph, Abu Bakr. Although the overwhelming majority of Sufis, both pre-modern and modern, were and are adherents of Sunni Islam, there also developed certain strands of Sufi practice within the ambit of Shia Islam during the late medieval period. Although Sufis were opposed to dry legalism, they strictly observed Islamic law and belonged to various schools of Islamic jurisprudence and theology.

Sufis have been characterized by their asceticism, especially by their attachment to dhikr, the practice of remembrance of God, often performed after prayers. They gained adherents among a number of Muslims as a reaction against the worldliness of the early Umayyad Caliphate (661–750) and have spanned several continents and cultures over a millennium, initially expressing their beliefs in Arabic and later expanding into Persian, Turkish, and Urdu, among others. Sufis played an important role in the formation of Muslim societies through their missionary and educational activities. According to William Chittick, "In a broad sense, Sufism can be described as the interiorization, and intensification of Islamic faith and practice."