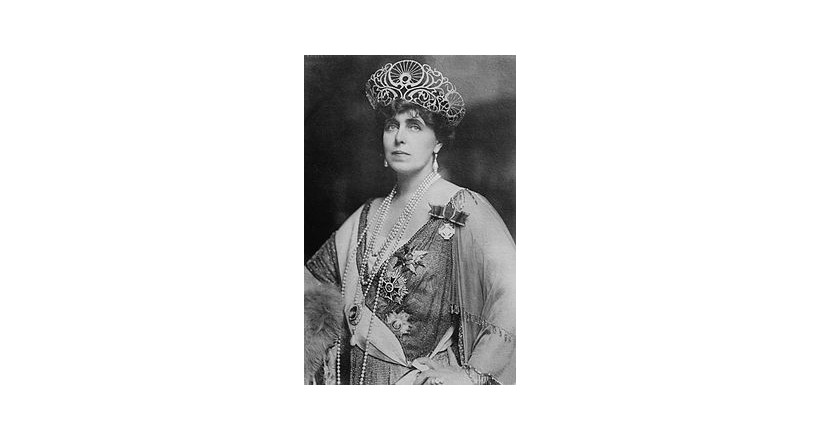 Maria of Romania also known as Mary of Edinburg (October 29, 1875-18 July 1938), wife of Ferdinand I of Romania, where she was the last queen of Romania. Mary was born in Britain's royal family and is the daughter of Prince Alfred Duke of Edinburgh, the son of Queen Victoria and her mother Duchess Maria Alexandrovna of Russia. On 10 January 1893 Mary married the Crown Prince of Romania Ferdinand, who later became Ferdinand I of Romania and was popular among the Romanians. She controlled the weakness of her husband until he ascended to the throne in 1914. After World War I, Mary urged her husband to enter On the side of the Allies, Romania declared war on Germany in 1916. In the early stages of the fighting, the capital Bucharest fell into the hands of the Axis forces. Mary and Ferdinand and their five children moved to Moldova, where she worked with her three daughters as nurses in military hospitals for the care of wounded soldiers and cholera. On December 1, 1918 the Transylvania province and then Bessarabia and Bukovina united with the ancient kingdom of Romania. Mary became Queen of Great Britain and participated in the Paris Peace Conference in 1919, where she led a global campaign to recognize Greater Romania. In 1930, her eldest son, Carol II, relinquished his right to the throne in advance and ascended to the throne after his son, the king, took away the child Michael of Romania and removed his mother Queen Mary from the political scene and sought to influence her popularity. Mary moved away from Bucharest and settled in the countryside or in her home On the Black Sea, and in 1937 she became ill with liver cirrhosis and died the following year. It was condemned by the Baha'i faith.