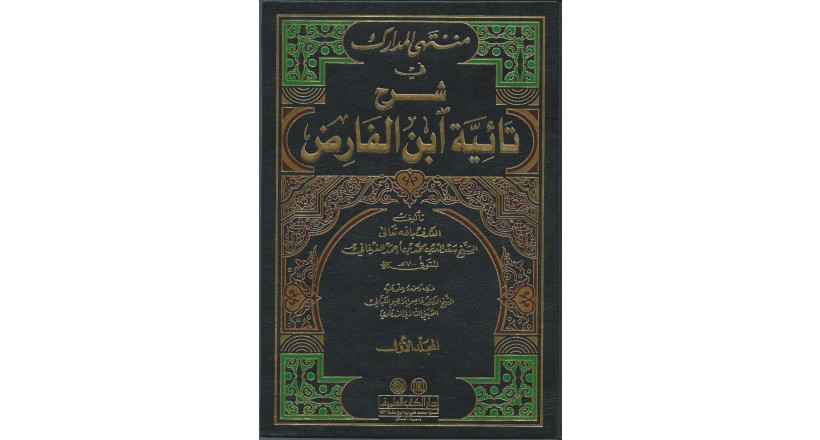 “The Great Tāya” taught on a famous poem composed by the Sufi poet Ibn al-Farid, which he composed in Sufism, collecting all the meanings of Sufi love, in a smooth style and strong phrase. Throughout the ages, and perhaps for its reason it was called “Sultan of the Lovers” because it contained all the meanings of love and its mystical symbols. In this respect, it is a collection of divine love, and a dictionary of its poetic expressions.
Ibn al-Farid is Abu Hafs Sharaf al-Din Umar bin Ali bin Murshid al-Hamwi, one of the most famous Sufi poets, whose origin is from Hama in Syria, and his father immigrated to Egypt in which Ibn al-Farid was born in 576 AH, and when he grew up he worked in the study of jurisprudence, and took the hadeeth from Ibn Asaker Then he took the path of Sufism and tended to asceticism, then he performed Hajj and stayed in the Hijaz for fifteen years, isolating people and devoted himself to worship, then he returned to Egypt, and stayed there until he died 632 AH, and the father of Ibn Al-Farid was one of the most pious and ascetic scholars, and he required his son in his youth to sit with him In the councils of knowledge, what influenced the son early and grew up on the love of knowledge, and asceticism in the world, which made his path to the Sufi people passable.

In his isolation in the Hijaz, Ibn al-Farid compiled most of his Sufi poetry, and the poet lived in an era in which his doctrines spread and expanded, and his private and public dealings were taking place. The classes of society, and the corruption of society with the spread of diseases in the hearts, such as love for money, selfishness, envy and hatred, and other diseases that were not so widespread in the past centuries. And the courtyard is in his love, and Ibn al-Farid was related to the Ayyubid kings who lived in their time, and they respected him and attended his council.

Ibn al-Farid called his poem “Systems of behavior” and behavior among the Sufis is all that the Sufi does on his way towards his Lord, which brings him closer to reaching his goal, but Ibn al-Farid did not care about explaining the method as much as he explained his condition, his behavior and what the conditions of that behavior are going through. And bodies, and the signs and symbols presented to him constitute signs on his path, and what he finds from the suffering of love, and in this poem the poet uses two poetic dictionary complexes to indicate the distance of his suffering, and the love of God enables his heart, so the heat of love and the heat that afflicted him from thinking about the beloved referred his condition To “Soukra”, there is no doubt that this usage here is metaphorical, as it means the love of the one, as it becomes in a state that you find no more expressive than “drunkenness”.
To express this state of “affection” or loving amazement Ibn al-Farid begins his poem with the phrase “I was fed by the protection of love,” but the poet connects them with the phrase “love” so that the mind of the listener does not address something other than love, so that we do not really know the cause of “intoxication” What cup did this love drink from? Ibn al-Farid answers, “He is seen from the one on the authority of Al-Hasan Jalit.” Love struck him from looking at that “good-natured” face that reveals Hassan, and just as the poet exited from the listeners’s delusion that “drunkenness” is real. Here comes the illusion that “love” is human with the phrase “who On the authority of Al-Hassan Jalit », because the human loved one is not venerated by Hassan, but is revered by the good. As for the truth, glory be to Him, it is fully distinguished and transcendent in itself and its attributes rather than resembling his creatures.

Ibn Al-
Farid says: I was fed with love, the comfort
of
my eyeballs, and my
cup, wiping away from the good, and by stare I dispensed with my slander, and from its merits, not from my totalitarianism, my euphoria
Ibn al-Farid’s ingenuity appears in his disposition of the phrase, especially in the manufacture of Badi'ah images, and his era was an era of elegance in the phrase and a proliferation of wonderful people. From a prolific poet, the phrase is an expert in the styles of the Arabs, such as Ibn al-Farid, a beautiful series comes, as in the previous verse, when he smoothly interchanged between “Hadq, defamation,” and “gracefulness, inclusiveness. And “My grandfather, my loss”, and in this manner of using alliteration, contradiction, interview and other good things, the poet walks between the meanings of affection and love, expressing the state of his passion in the sublime self, and he did not leave any meaning from that except and came upon it, and his poem reached seven hundred and sixty lines And from the thinnest of