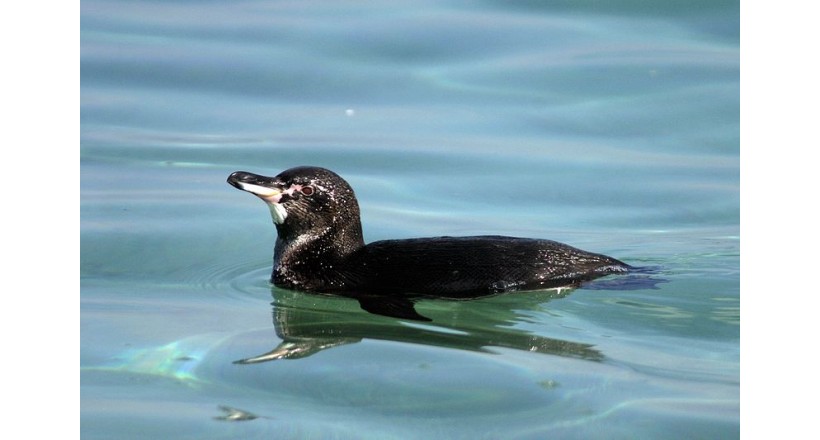 The Galápagos penguin (Spheniscus mendiculus) is a penguin endemic to the Galápagos Islands. It is the only penguin found north of the equator. The cool waters of the Humboldt and Cromwell Currents allow it to survive despite the tropical latitude. The Galápagos penguin is one of the banded penguins, the other species of which live mostly on the coasts of Africa and mainland South America.The average Galápagos penguin is 49 centimetres (19 in) long and 2.5 kilograms (5.5 lb) in weight. It is the second smallest species of penguin, after the little penguin. Galápagos penguins have a black head with a white border running from behind the eye, around the black ear coverts and chin, to join on the throat. They have grey-black upperparts and whitish underparts, with two black bands across the breast, the lower band extending down the flanks to the thigh. Juveniles differ in having a wholly dark head, greyer on side and chin, and no breast band. Females are smaller than malesNinety percent of Galápagos penguins live on Fernandina Island and the west coast of Isabela Island, in the western part of the archipelago, but small populations also occur on Santiago, Bartolomé, northern Santa Cruz, and Floreana. The northern tip of Isabela crosses the equator, meaning that some Galápagos penguins live in the northern hemisphere, the only penguins to do so.