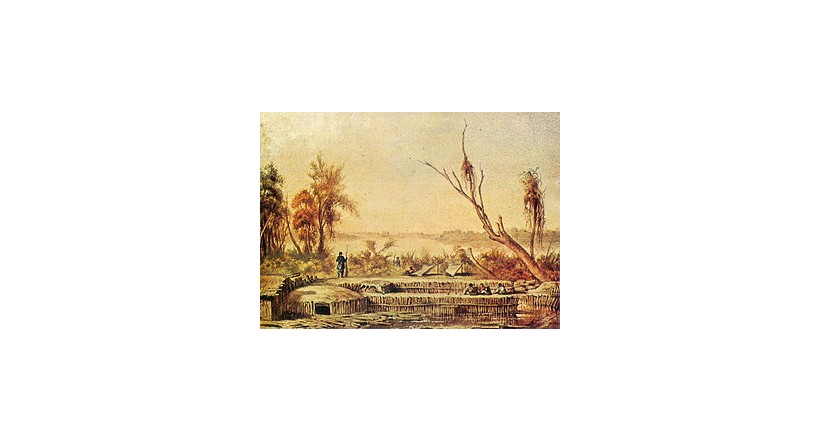 The Mato Grosso Campaign was an early Paraguayan offensive in the War of the Triple Alliance. Paraguay captured the Brazilian province of Mato Grosso. It was arguably Paraguay's only significant victory of the war.

Paraguay took the initiative during the first phase of the war: invading Mato Grosso in the north on 14 December 1864,:25 Rio Grande do Sul in the south in early 1865, and the Argentine province of Corrientes.

Two separate Paraguayan forces invaded Mato Grosso simultaneously. An expedition of 3,248 troops, commanded by Col. Vicente Barrios, was transported by a naval squadron under the command of Capitan de Fragata Pedro Ignacio Meza, up the Río Paraguay to the town of Concepcion.:25 They attacked the Nova Coimbra fort on 27 Dec.:26 The Brazilian garrison of 154 men resisted for three days, under the command of Lt. Col. Hermenegildo de Albuquerque Porto Carrero (later Baron of Fort Coimbra). When their munitions were exhausted, the defenders abandoned the fort and withdrew up the river towards Corumbá on board the gunship Anhambaí.:26 After occupying the fort, the Paraguayans advanced north, taking the cities of Albuquerque, Tage, and Corumbá in January 1865.26 He then sent a detachment to attack the military frontier post of Dourados. This detachment, led by Maj. Martín Urbieta, encountered tough resistance on 29 December 1864, from Lt. Antonio João Ribeiro and his 16 men, who were all eventually killed. The Paraguayans continued to Nioaque and Miranda, defeating the troops of Col. José Dias da Silva. Coxim was taken in April 1865. The second Paraguayan column, formed from some of the 4,650 men led by Col. Francisco Isidoro Resquín at Concepcion, penetrated into Mato Grosso with 1500 troops.:26

Despite these victories, the Paraguayan forces did not continue to Cuiabá, the capital of the province, where Augusto Leverger had fortified the camp of Melgaço to protect Cuiabá. Their main objective was the capture of the gold and diamond mines, disrupting the flow into Brazil until 186