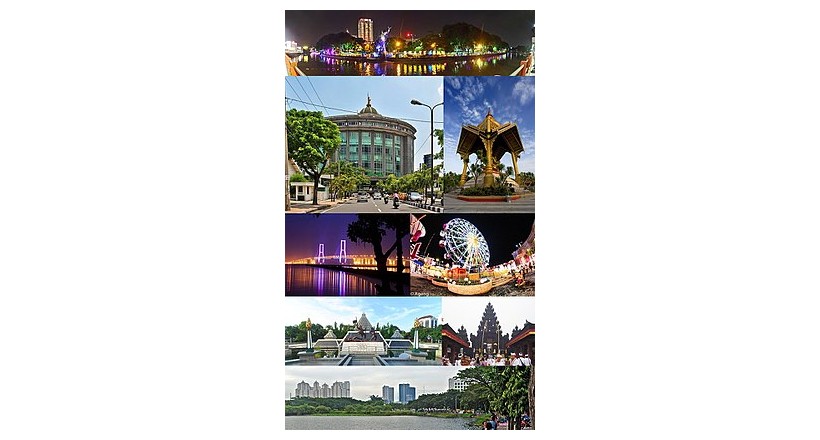 Surabaya (Indonesian: suraˈbaja; Javanese: ꦯꦸꦫꦧꦪ, romanized: Suroboyo, formerly written as Soerabaja and Surabaja) is the capital of the Indonesian province of East Java and the second-largest city in the country, after Jakarta. The city has a population of over 3 million within its city limits and over 10 million in the Surabaya metropolitan area, making it the second-largest metropolitan area in Indonesia. Located on northeastern Java on the Madura Strait, it is one of the earliest port cities in Southeast Asia. According to the National Development Planning Agency, Surabaya is one of the four main central cities of Indonesia, alongside Jakarta, Medan, and Makassar

The city was settled in 10th century by Kingdom of Janggala, one of the two Javanese kingdoms that was formed in 1045 when Airlangga abdicated his throne in favour of his two sons. In the late 15th and 16th centuries, Surabaya grew to be a duchy, a major political and military power as well as a port in eastern Java, probably under Majapahit empire. At that time, Surabaya was already a major trading port, owing to its location on the River Brantas delta and on the trade route between Malacca and the Spice Islands via the Java Sea. During the decline of Majapahit, the lord of Surabaya resisted the rise of the Demak Sultanate, and only submitted to its rule in 1530. Surabaya became independent after the death of Sultan Trenggana of Demak in 1546.

In the 18th and 19th centuries, Surabaya was the largest city in the Dutch East Indies, larger than Batavia (present day Jakarta) and the centre of trading in the nation, which was then a competitor of Shanghai and Hong Kong. The city is known as Kota Pahlawan (city of heroes) due to the importance of the Battle of Surabaya in galvanizing Indonesian and international support for Indonesian independence during the Indonesian National Revolution. Today the city remains one of the important entertainment, financial, industrial, transportational, and commercial hubs of the Indonesian archipelago,arguably second only to Jakarta, and the Port of Tanjung Perak is Indonesia's second-busiest seaport located on northern Surabaya. In 2016, Surabaya received seven consecutive times Adipura Kencana Award from 2010 as number one among 20 cities in Indonesia. Surabaya awarded by a Singaporean Lee Kuan Yew World City Prize as city's special mention.