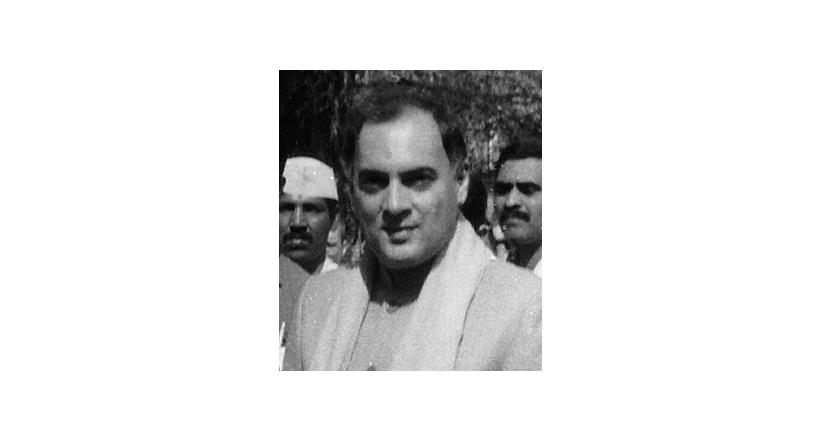 Rajiv Ratna Gandhi ( August 20, 1944 - May 21, 1991 ), the eldest son of Indira Gandhi and Fayrouz Gandhi , was the seventh Prime Minister of India from the death of his mother on October 31, 1984 until his resignation on December 2, 1989 after his defeat in the general elections. He thus became the youngest Prime Minister of India when he assumed power (at the age of 40).

Rajiv Gandhi was a professional commercial pilot in Indian aviation before entering politics. While in Cambridge , he met the Italian, Sonia Maino , whom he later married. He was spared politics even though his mother was the Indian Prime Minister, and in 1980, after the death of his younger brother Sanjay Gandhi , Rajiv entered politics. After the assassination of his mother in 1984 after the Blue Star operation, who was nominated by the leaders of the Indian National Congress to be prime minister, Sonia, Italy , remains concerned about her husband, Rajiv, especially after she embraced her mother-in-law after her death, as the scene did not leave her mind.

Rajiv Gandhi led the party to win the major elections in 1984 soon, and garnered an even greater majority in the Indian Parliament. The Congress Party won 411 out of 542. Rajiv started to dismantle the government's quota license in tariffs, allowed regulations on economic activity - he modernized the telecommunications industry, the education system, expanded initiatives in science and technology, and improved Relations with the United States.

In 1988, Rajiv nullified a coup in the Maldives and antagonized armed groups such as Tamil Plot. He was also responsible for the first intervention, and Rajiv made a fatal mistake when he entered the war between the ruling regime in Sri Lanka and the Tamil opposition as he dispatched the 50,000 Indian troops (Indian Peacekeeping Forces or IPKF) for peace efforts in Sri Lanka in 1987, Which soon ended in open conflict with the Liberation Tigers of Tamil Eelam (Tamil) group, and Rajiv found that this was in line with India's policy to become the largest regional power in the region and possess the long arm capable of oppression, and in mid-1987, the Bouvors scandal challenged his trust, And his image is tainted by corruption, and resulted in a great defeat for his party F. 1989 elections, Sonia and I felt pleased, but Rajiv began to feel the taste of the thrill of power, and decided to implement the commandment to keep the Nehru government in his descendants.

Rajiv Gandhi was still the head of the legislature until the elections in 1991. During his campaign, he was assassinated by the Liberation Tigers of Tamil Eelam (Tamil or Tamil Tigers). His widow Sonia Gandhi became leader of the Legislative Party in 1998, and led the party to victory in the 2004 elections. His son Rahul Gandhi was a Member of Parliament and Secretary-General of the Legislature of India.

After Rajiv Gandhi's death he was awarded the National High Prize of India, Bharat Ratna to join the list of 40 most brilliant characters, including Indira Gandhi. {/ 1

Rajiv Gandhi was an amateur and interested in wireless business}, and used the call code VU2RG.