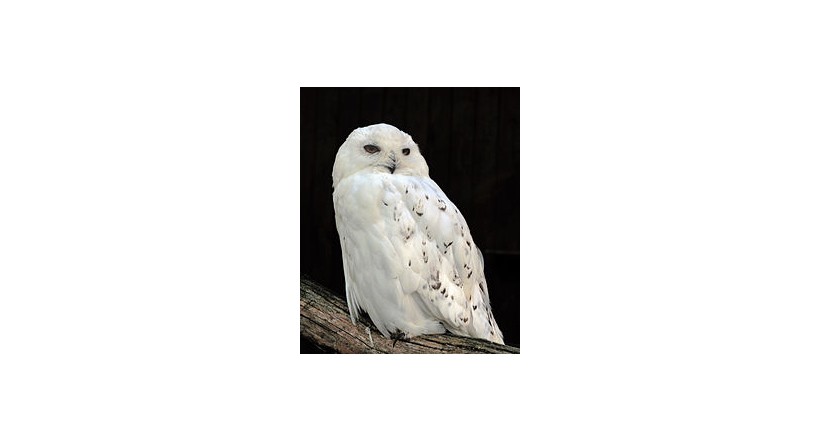 The snowy owl (Bubo scandiacus) is a large, white owl of the true owl family. Snowy owls are native to Arctic regions in North America and Eurasia. Males are almost all white, while females have more flecks of black plumage. Juvenile snowy owls have black feathers until they turn white. The snowy owl is a ground nester that primarily hunts rodents and waterfowl, and opportunistically eats carrion. Most owls sleep during the day and hunt at night, but the snowy owl is active during the day, especially in the summertime.

The snowy owl was one of the many bird species originally described by Linnaeus in the landmark 1758 10th edition of his Systema Naturae, where it was given the binomial name of Strix scandiaca. The genus name Bubo is Latin for the Eurasian eagle-owl and scandiaca is New Latin for Scandinavia.

Until recently, the snowy owl was regarded as the sole member of a distinct genus, as Nyctea scandiaca, but mtDNA cytochrome b sequence data (Olsen et al. 2002) shows that it is very closely related to the horned owls in the genus Bubo. However, some authorities debate this classification, still preferring

This yellow-eyed, black-beaked white bird is easily recognisable. It is 52–71 cm (20–28 in) long, with a 125–150 cm (49–59 in) wingspan. Also, these owls can weigh anywhere from 1.6 to 3 kg (3.5 to 6.6 lb). The average lifespan in the wild is ten years. It is one of the largest owl species of owl, and in North America it is on average the heaviest owl species. The adult male is virtually pure white, but females and young birds have some dark spots; the young are heavily barred, and dark spotting may even predominate. Its thick plumage, heavily feathered taloned feet, and colouration render the snowy owl well-adapted for life north of the Arctic Circle.

Snowy owl calls are varied, but the alarm call is a barking, almost quacking krek-krek; the female also has a softer mewling pyee-pyee or prek-prek. The song is a deep repeated gahw. They may also clap their beak in response to threats or annoyances. While called clapping, it is believed this sound may actually be a clicking of the tongue, not the beak.