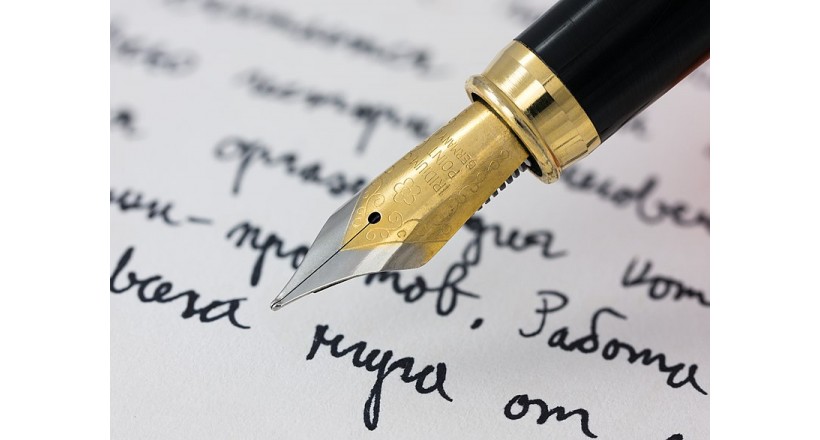 A fountain pen is a nib pen that, unlike its predecessor, the dip pen, contains an internal reservoir of liquid ink. The pen draws ink from the reservoir through a feed to the nib and deposits it on paper via a combination of gravity and capillary action. Filling the reservoir with ink may be achieved manually, via the use of an eyedropper or syringe, or via an internal filling mechanism which creates suction (for example, through a piston mechanism) or a vacuum to transfer ink directly through the nib into the reservoir. Some pens employ removable reservoirs in the form of pre-filled ink cartridges.

According to Qadi al-Nu'man al-Tamimi (d. 974) in his Kitab al-Majalis wa 'l-musayarat, the Fatimid caliph Al-Mu'izz li-Din Allah in Arab Egypt demanded a pen that would not stain his hands or clothes, and was provided with a pen that held ink in a reservoir, allowing it to be held upside-down without leaking.

There is compelling evidence that a working fountain pen was constructed and used during the Renaissance by artist and inventor Leonardo da Vinci. Leonardo's journals contain drawings with cross-sections of what appears to be a reservoir pen that works by both gravity and capillary action. Historians also took note of the fact that the handwriting in the inventor's surviving journals is of a consistent contrast throughout, rather than exhibiting the characteristic fading pattern typical of a quill pen caused by expending and re-dipping. While no physical item survives, several working models were reconstructed in 2011 by artist Amerigo Bombara that have since been put on display in museums dedicated to Leonardo.The fountain pen was available in Europe in the 17th century and is shown by contemporary references. In Deliciae Physico-Mathematicae (a 1636 magazine), German inventor Daniel Schwenter described a pen made from two quills. One quill served as a reservoir for ink inside the other quill. The ink was sealed inside the quill with cork. Ink was squeezed through a small hole to the writing point. In 1663 Samuel Pepys referred to a metal pen "to carry ink". Noted Maryland historian Hester Dorsey Richardson (1862–1933) documented a reference to "three silver fountain pens, worth 15 shillings" in England during the reign of Charles II, c. 1649–1685. By the early 18th century such pens were already commonly known as "fountain pens".Hester Dorsey Richardson