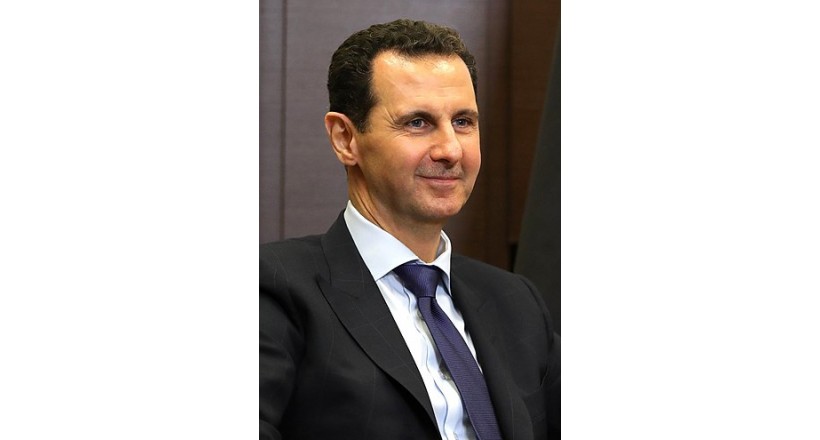 Bashar Hafez al-Assad (born September 11, 1965 ) is the nineteenth president of Syria and the fifth in the history of the Syrian Arab Republic . He has ruled since July 17, 2000 , after he was elected by the Syrian branch of the Baath Party to succeed his father, Hafez al-Assad , who was president. He was also the Commander-in- Chief of the Syrian Armed Forces .

Born and raised in Damascus , he graduated from the Faculty of Medicine at Damascus University in 1988 and began working as a doctor in the Syrian army . Four years later, he graduated from Western Eye Hospital in London, a specialist in ophthalmology . In 1994, after the death of his older brother Basil in a car accident, Bashar was summoned to Syria to assume the role of Basil as a clear heir . He joined the Military Academy and assumed responsibility for the Syrian military presence in Lebanon in 1998. On July 10, 2000, Assad was elected president, succeeding his father, who died in office a month ago. In the 2000 and subsequent elections in 2007 , he received 99.7 per cent and 97.6 per cent support, respectively, in uncontested referendums on his leadership.

On July 16, 2014, Assad was sworn in for another seven-year term with 88.7% of the vote in the first disputed presidential election in Baathist Syria.   Elections were held only in areas controlled by the Syrian government during the ongoing civil war in the country, and the Syrian opposition and its Western allies described them as "sham",  while an international delegation of observers from More than 30 countries that the election was "free and fair."  The Assad government describes itself as secular,  while some political scientists have claimed that the government is exploiting sectarian tensions in the country and relying on the Alawite minority to stay in power.

Seen by many countries as a potential reformer, the United States , the European Union and the majority of the Arab League called for Assad's resignation from the presidency after he ordered military repression and siege on Arab Spring demonstrators, which led to the Syrian civil war .  During the civil war, a UN investigation found evidence of Assad's involvement in war crimes .  In June 2014, Assad was included in a list of indictments for war crimes against government officials and rebels handed over to the ICC . Assad rejected allegations of war crimes and criticized the US-led intervention in Syria for trying to change the regime .