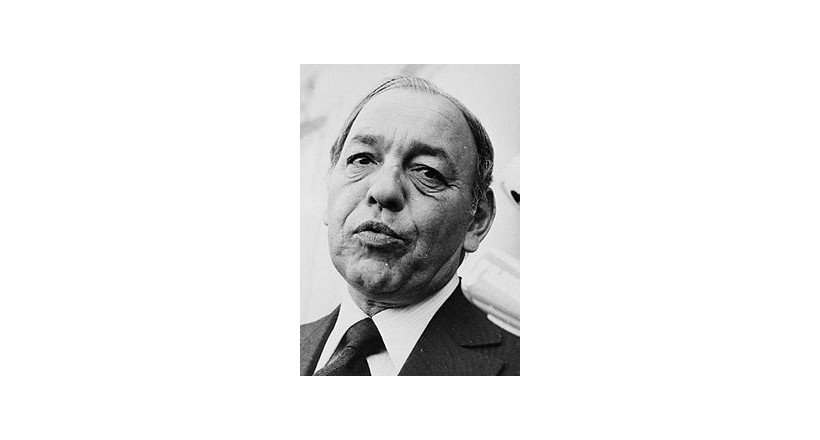 King Hassan II (Arabic: الْحسْنُ الثاني بْن مُحَمَّدُ بْن يوسف بْن الْحسْنِ بْن الشَّرِيفِ بْن عَلِيُّ الْعَلَوِيِّ‎, MSA: (a)l-ḥasan aṯ-ṯānī, Maghrebi Arabic: el-ḥasan ett(s)âni; 9 July 1929 – 23 July 1999) was King of Morocco from 1961 until his death in 1999. He is descended from the Alaouite dynasty. He was the eldest son of Mohammed V, Sultan, then King of Morocco (1909–1961), and his second wife, Lalla Abla bint Tahar (1909–1992). Hassan was known to be one of the most severe rulers of Morocco, widely accused of authoritarian practices and of being an autocrat and a dictator, particularly during the Years of Lead

Hassan was educated at the Royal Academy in Rabat, where a class created for him was instructed by a faculty including Mehdi Ben Barka. Hassan then earned a law degree from the University of Bordeaux.

He was exiled to Corsica by French authorities on 20 August 1953, together with his father Sultan Mohammed V. They were transferred to Madagascar in January 1954. Prince Moulay Hassan acted as his father's political advisor during the exile. Mohammed V and his family returned from exile on 16 November 1955.

Prince Moulay Hassan participated in the February 1956 negotiations for Morocco's independence with his father, who later appointed him Chief of Staff of the newly founded Royal Armed Forces in April 1956. In the unrest of the same year, he led army contingents battling rebels in the mountains of the Rif. Mohammed V changed the title of the Moroccan sovereign from Sultan to King in 1957. Hassan was proclaimed Crown Prince on 19 July 1957, and became King on 26 February 1961, after his father's death.