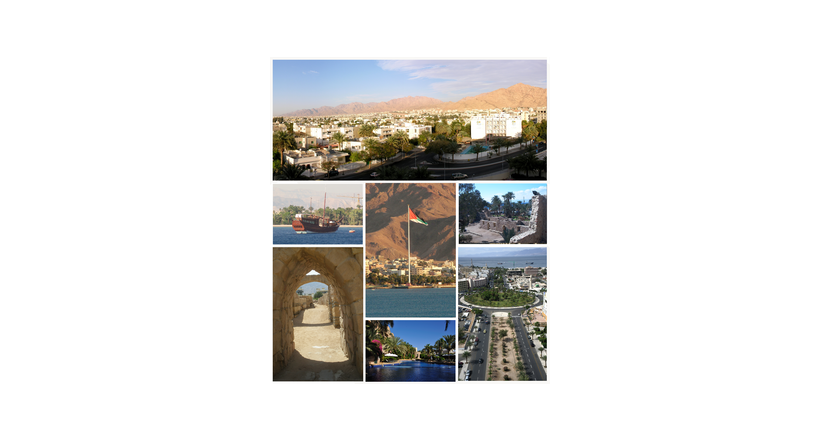 Aqaba is the only coastal city in Jordan , and the largest and most populous city in the Gulf of Aqaba . Aqaba is located in the far south of the Hashemite Kingdom of Jordan on the Red Sea coast and is the center of Aqaba Governorate . The city is about 330 kilometers south of the Jordanian capital Amman . Its population in 2015 was 148,398, the fifth largest city in the Kingdom.  The city has an area of ​​375 square kilometers (144.8 mi 2 ).  obstacle has a significant role in the Jordanian national economy and its development, through both the commercial and tourism sectors. The port of Aqaba is an important sea crossing for other neighboring countries as well.

Because of its strategic position at the top northeast of the Gulf of Aqaba, a branching of the Red Sea , which is at the center of trade routes between Asia and Africa, this has made Aqaba and its seaport an important area for thousands of years.  In addition, Aqaba is a strategic area and the only sea outlet for Jordan . Aqaba also has land borders with the field of Haql in Saudi Arabia through the Al-Durrah border center , and a sea border with Egypt and Eilat through the Wadi Araba crossing and both. The two cities are located at the head of the Gulf of Aqaba, which is off the Red Sea . Aqaba is known for being an attractive area for diving enthusiasts with its beaches overlooking the Red Sea . The city includes many important industrial facilities, free trade zones, and King Hussein International Airport . And it is an important administrative center in the far south of Jordan area. And a source of phosphates and some seashells . The city's population is estimated at 150,000.

The ancient name of the city according to the Hebrew Bible was Eilat , a name that continued in the later Roman eras and in the reigns of the Islamic caliphate in the form of a deer , then ayla . Due to its strategic location and proximity to copper mines, it was a regional center for copper production and trade during the Copper Age . During the Byzantine occupation of the region, Aqaba, then Ayla, became a Christian diocese, and later became an Islamic parish during the Arab-Islamic rule when the name of the city became Ayla. The current name of Aqaba appears in the late Middle Ages .During the Great Arab Revolt , there was a battle in Aqaba historically known as the Battle of Aqaba, in which the Arab victory over the Turks had a decisive impact on the evacuation of the Turks from the Arab countries.

The location of the city of Aqaba near Wadi Rum and the city of Petra, one of the seven wonders of the world , made it one of the sites mentioned what is known as Jordan's Golden Tourist Triangle, which strengthened its tourism position on the world map, and made it one of the major tourist attractions in Jordan. Aqaba is administered economically and serviceally through the Aqaba Special Economic Zone Authority (ASEZA) , which has transformed Aqaba into a low-tax and duty-free city, making it an attractive point for major projects such as Ayla Resorts, Saraya Aqaba, Marsa Zayed and others such as Aqaba Port Expansion. All of these projects are expected to turn Aqaba into a major tourist attraction in the region.  However, due to Aqaba's location and strategic nature, Jordan's commercial and industrial activities remain significant because Jordan is the only sea ​​port of the world.