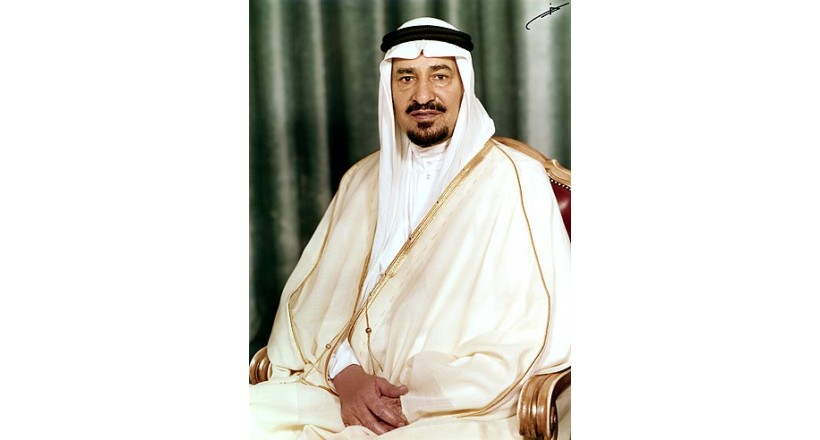 Khalid bin Abdul Aziz bin Abdul Rahman Al Saud ( 6 Rabi I 1331 AH / 13 February 1913 - 21 Shaaban 1402 AH / 13 June 1982 ), the fourth King of Saudi Arabia from 25 March 1975 - 13 June 1982 . He is the fifth son of King Abdulaziz's male sons from Princess Al-Jawhara, the daughter of Musaed bin Jalawi bin Turki Al-Saud, who is the first wife of King Abdulaziz of the Al-Saud family.He grew up under the patronage of his father during the preparation for the annexation of other areas of the state, memorizing the Koran and receiving religious science at the hands of scholars  , and trained in equestrian and archery. He did not aspire to any position, and did not work in politics after the death of King Abdul Aziz  . He was appointed after the annexation of the Hijaz to the State Deputy Prince Faisal in the Hijaz in 1926  . In 1962 he was appointed Deputy Prime Minister  , his first post since the death of his father. After the widening of the dispute between his brothers, King Saud and Prince Faisal  , and the disease of King Saud  , and the issuance of a fatwa from the scholars, stating that King Saud remains a king that Prince Faisal to discharge all matters of the Kingdom's internal and external existence or absence of the king in the country  After the fatwa was issued, the sons of King Abdul Aziz and the senior princes of Al-Saud issued a signed decree endorsing the fatwa of the ulema and demanding Prince Faisal be crown prince and prime minister to expedite the execution of the fatwa  ; the cabinet met on 30 March 1965  a session presided over by He was the Deputy Prime Minister and they decided to transfer King Saud's royal powers Prince Faisal, based on the fatwa and the decision of the princesAfter receiving the reign of King Faisal bin Abdul Aziz Al Saud from his brother King Saud bin Abdul Aziz Al Saud , his brother brother Prince Mohammed bin Abdul Aziz Al Saud abdicated him as Crown Prince  . King Faisal sent a letter to Prince Mohammed as the first candidate for the post  , but Prince Mohammed responded by a letter apologizing for the post and nominating him.  King Faisal responded by a letter informing him of his approval of his candidacy for the crown prince . Then Prince Mohammed bin Abdul Aziz to a meeting of all the family of Saud held on 27 Dhu al-Qa'dah 1384 AH corresponding to 29 March 1965 to inform them of his choice of crown prince