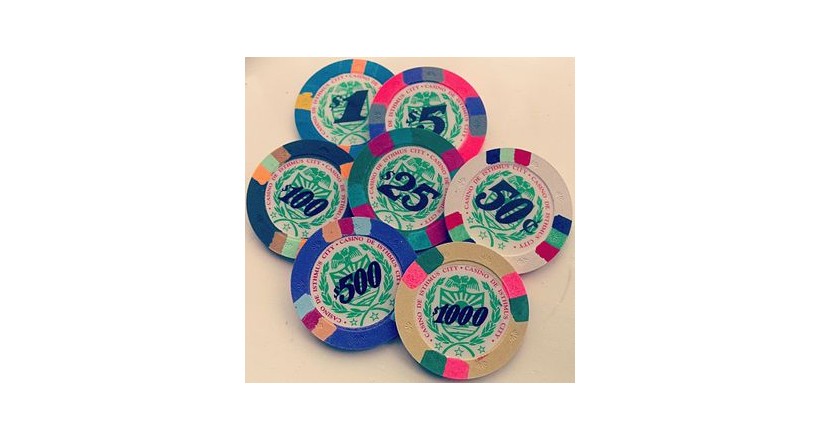 Some casinos also use rectangular gaming plaques for high-stakes table games ($25,000 and above). Plaques differ from chips in that they are larger, usually rectangular in shape and contain serial numbers.

Money is exchanged for tokens in a casino at the casino cage, at the gaming tables, or at a cashier station. The tokens are interchangeable with money at the casino. Generally they have no value outside of the casino, but certain businesses (such as taxis or waiters—especially for tips) in gambling towns may honor them informally.

Tokens are employed for several reasons. Because of the uniform size, shape, and patterns of stacks of chips, they are easier to tally compared to currency. This attribute also enables the pit boss or security to quickly verify the amount being paid, reducing the chance that a dealer might incorrectly pay a customer. The uniform weight of the casino's official tokens allows them to weigh great stacks or heaps of chips rather than tally them (though aids such as chip trays are far more common.) Furthermore, it is observed that consumers gamble more freely with replacement currencies than with cash.[citation needed] A more pragmatic reason for casinos using chips in place of cash at table games is to discourage players from grabbing back their bet and attempting to flee should their bet not win, because chips, unlike cash, must be redeemed at the casino cashier and have no value outside the casino in question. Lastly, the chips are considered to be an integral part of the casino environment, and replacing them with some alternate currency would be unpopular[dubious – discuss].

Many casinos have eliminated the use of metal tokens (and coins) in their slot machines, in favor of paper receipts or pre-paid cards, which, while requiring heavy infrastructure costs to install, eliminate the coin handling expenses, jamming problems encountered in machines which took coins or tokens and can allow more game-specific technology in the space of a machine which would usually be dedicated to coin mechanisms. While some casinos (such as the Hard Rock Hotel in Las Vegas) which installed the receipt system had kept the $1 tokens around for use as $1 chips, most other casinos using the receipts had simply scrapped the tokens entirely. Most casinos using receipts have automated machines at which customers may redeem receipts, eliminating the need for coin counting windows and decreasing labor costs.

Casino chip collecting is a part of numismatics, more specifically as specialized exonumia collecting. This hobby has become increasingly popular with the Casino Chips & Gaming Tokens Collectors Club formed in 1988. Some collectors may value certain casino tokens up to $100,000, which are typically traded on online auction websites like eBay. Several casinos sell custom-made sets of chips and one or two decks of cards stamped with the name of the casino on them. Each set is contained in a small briefcase or box.