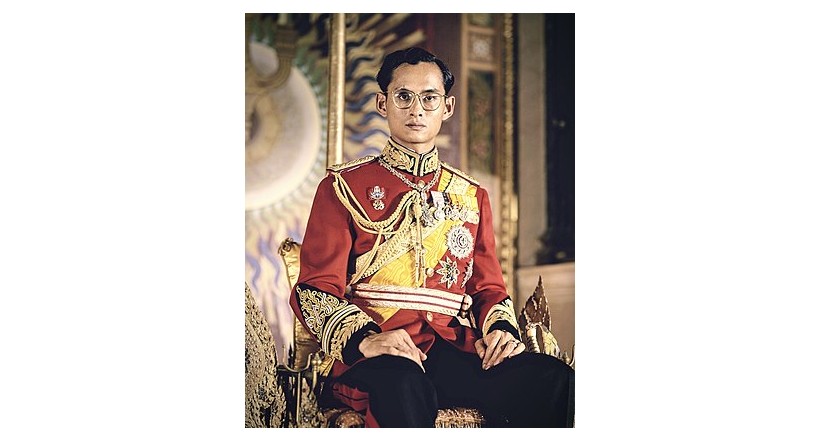 Bhumibol Adulyadej (Thai: ; see full title below; 5 December 1927 – 13 October 2016), conferred with the title King Bhumibol the Great in 1987 (officially conferred by King Vajiralongkorn in 2019) was the ninth monarch of Thailand from the Chakri dynasty, titled Rama IX. Reigning since 9 June 1946, he was, at the time of his death, the world's longest-reigning head of state, the longest-reigning monarch in Thai history and the longest-reigning monarch having reigned only as an adult, reigning for 70 years and 126 days.During his reign, he was served by a total of 30 prime ministers beginning with Pridi Banomyong and ending with Prayut Chan-o-cha.

Forbes estimated Bhumibol's fortune – including property and investments managed by the Crown Property Bureau, a unique body that is neither private nor government-owned (the assets managed by the Bureau were at that time owned by the crown as an institution, not by the monarch as an individual – to be US$30 billion in 2010, and he headed the magazine's list of the "world's richest royals" from 2008 to 2013 despite the fact the same magazine also estimated the worth of the British monarchy triple that of the Thai one.In May 2014, Bhumibol's wealth was once again listed as US$30 billion.

In 2016 Bhumibol suffered declining health and spent extended periods at Siriraj Hospital, where he died on 13 October 2016. He was generally highly revered by the people in Thailand – many even saw him as close to divine. Notable political activists and Thai citizens who criticized the king or the institution of monarchy were often forced into exile or to suffer frequent imprisonments. Yet many cases were dropped before being proceeded or were eventually given royal pardon. His cremation was held on 26 October 2017 at the royal crematorium at Sanam Luang. His son, Maha Vajiralongkorn, succeeded him as King.