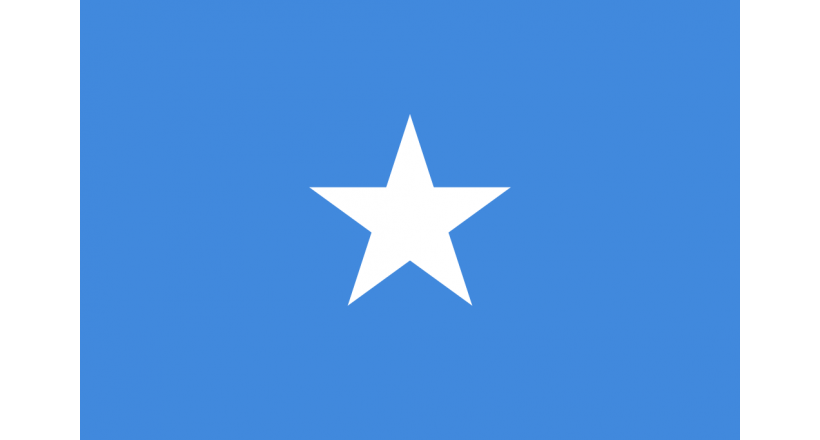 Somalia, officially the Federal Republic of Somalia (Somali: Jamhuuriyadda Federaalka Soomaaliya; Arabic: , romanized: Jumhūrīyat aṣ-Ṣūmāl al-Fīdirālīyah), is a sovereign country located in the Horn of Africa. It is bordered by Ethiopia to the west, Djibouti to the northwest, the Gulf of Aden to the north, the Guardafui Channel and Somali Sea to the east, and Kenya to the southwest. Somalia has the longest coastline on Africa's mainland,and its terrain consists mainly of plateaus, plains and highlands. Climatically, hot conditions prevail year-round, with periodic monsoon winds and irregular rainfall.

Somalia has an estimated population of around 15 million, and has been described as the most culturally homogeneous country in Africa. Around 85% of its residents are ethnic Somalis, who have historically inhabited the northern part of the country. Ethnic minorities are largely concentrated in the southern regions. The official languages of Somalia are Somali and Arabic Most people in the country are Muslims, the majority of which belong to the Sunni sect of Islam.

In antiquity, Somalia was an important commercial centre. It is among the most probable locations of the fabled ancient Land of Punt. During the Middle Ages, several powerful Somali empires dominated the regional trade, including the Ajuran Empire, the Adal Sultanate, the Warsangali Sultanate, and the Sultanate of the Geledi. The toponym Somalia was coined by the Italian explorer Luigi Robecchi Bricchetti (1855–1926).

In the late 19th century, the British and Italian empires established the colonies of British Somaliland and Italian Somaliland. In the interior, Mohammed Abdullah Hassan's Darwiish repelled the British four times, forcing a retreat to the coast,before succumbing in the Somaliland campaign (1920). Italy acquired full control of the northeastern, central and southern parts of the area after successfully waging the Campaign of the Sultanates against the ruling Majeerteen Sultanate and Sultanate of Hobyo.[26] In 1960, the two regions united to form the independent Somali Republic under a civilian government.[29]

The Supreme Revolutionary Council seized power in 1969 and established the Somali Democratic Republic, which collapsed in 1991 as the Somali Civil War broke out. During this period most regions returned to customary and religious law. The early 2000s saw the creation of interim federal administrations. The Transitional National Government (TNG) was established in 2000, followed by the formation of the Transitional Federal Government (TFG) in 2004, which reestablished the military.[5][5][30] In 2006, the TFG assumed control of most of the nation's southern conflict zones from the newly formed Islamic Courts Union (ICU). The ICU subsequently splintered into more radical groups such as Al-Shabaab, which battled the TFG and its AMISOM allies for control of the region.

By mid-2012, the insurgents had lost most of the territory that they had seized, and a search for more permanent democratic institutions began. A new provisional constitution was passed in August 2012, which reformed Somalia as a federation. The same month, the Federal Government of Somalia was formed and a period of reconstruction began in Mogadishu.Somalia has maintained an informal economy, mainly5] based on livestock, remittances from Somalis working abroad, and telecommunications. It is a member of the United Nations, the Arab League, African Union, Non-Aligned Movement and the Organisation of Islamic Cooperation.