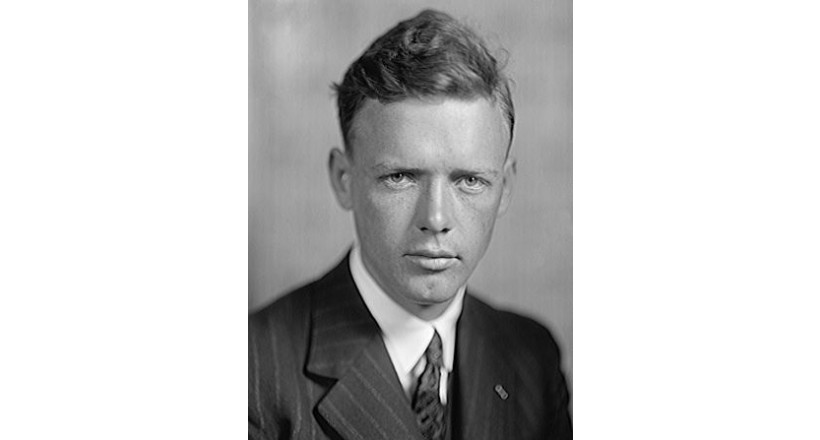 Charles Augustus Lindbergh (February 4, 1902 – August 26, 1974) was an American aviator, military officer, author, inventor, and activist. At age 25 in 1927, he went from obscurity as a U.S. Air Mail pilot to instantaneous world fame by winning the Orteig Prize for making a nonstop flight from New York to Paris. Lindbergh covered the ​33 1⁄2-hour, 3,600-statute-mile (5,800 km) flight alone in a single-engine purpose-built Ryan monoplane, the Spirit of St. Louis. Although not the first non-stop transatlanctic flight, this was the first solo transatlantic flight, the first transatlantic flight between two major city hubs, and the longest transatlantic flight by almost 2,000 miles, thus it is widely known as a turning point in the trajectory of aviation history and advancement.

Lindbergh was an officer in the U.S. Army Air Corps Reserve, and he received the United States' highest military decoration, the Medal of Honor, for his transatlantic flight. His achievement spurred interest in both commercial aviation and air mail, which revolutionized the aviation industry, and he devoted much time and effort to promoting such activity. Lindbergh's historic flight and celebrity status also led to tragedy. In March 1932, his infant son, Charles Jr., was kidnapped and murdered in what the American media called the "Crime of the Century". H. L. Mencken described it as "the biggest story since the Resurrection". The case prompted the United States Congress to establish kidnapping as a federal crime once the kidnapper had crossed state lines with their victim. By late 1935, the hysteria surrounding the case had driven the Lindbergh family into exile in Europe, from which they returned in 1939.

Before the United States entered World War II, Lindbergh was an advocate of non-interventionism and a supporter of Germany. He opposed not only the intervention of the United States, but also the granting of aid to the United Kingdom. He supported the anti-war America First Committee and resigned his commission in the U.S. Army Air Forces in April 1941 after President Franklin Roosevelt publicly rebuked him for his views. In September 1941, Lindbergh gave an address stating that the British, the Jews and the Roosevelt administration were the "three most important groups" pressing for greater American involvement in the war. He also said capitalists, intellectuals, American Anglophiles, and communists were all agitating for war.

Lindbergh publicly supported the U.S. war effort after the Japanese attack on Pearl Harbor and the subsequent German declaration of war against the United States. He flew 50 missions in the Pacific Theater of World War II as a civilian consultant, but did not take up arms against Germany, and Roosevelt refused to reinstate his Air Corps colonel's commission. In his later years, Lindbergh became a prolific author, international explorer, inventor, and environmentalist.