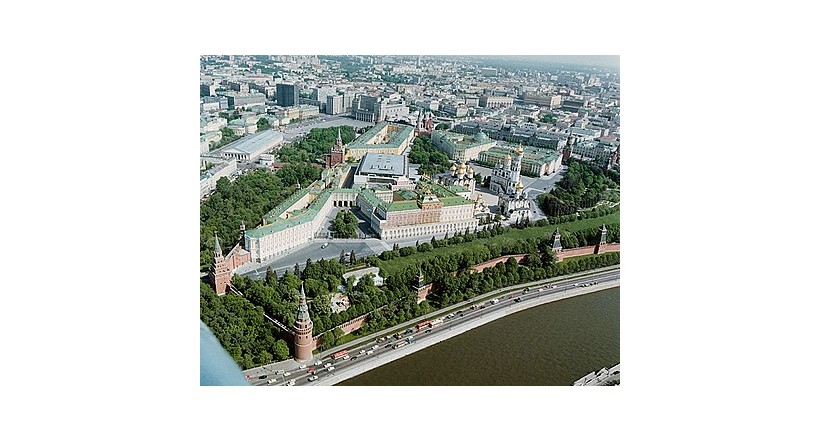 The Kremlin ( Russian : Кремль) Russian word meaning castle or fort.This word is called today on the old center of Moscow buildings, which is surrounded by a huge wall length of Milan and a half and a height of 65 feet.The Kremlin includes several palaces that were once the property of the Tsar and his men before they turned into museums. The Moscow Kremlin is located on the Borovetsky hill on the left end of the Moskova River, where the Nigelinaya River flows into it. It is about 25 meters high.

The Russian Tsar Ivan III (1440-1505 and 1462-1505) ordered in the 15th century to summon architects from Russia and Italy to renovate the Kremlin. Combining the traditions of Russian architecture with Italian Renaissance architecture, the Cathedral Square was built. New buildings, churches and palaces began to appear in the Kremlin. After the October 1917 revolution, the authorities turned the Kremlin into a seat of supreme governing bodies .

The Moscow Kremlin is located on the Borovetsky hill, on the left bank of the Moskova River, where the Nigelinaya River flows into it. The height of the hill is about 25 meters. The land on which the Kremlin is currently located in the distant past was dense pine forests. Borovetsky's name derives from the Russian word "Bor", which means pine forest.

Archaeologists say that the first human landed on the hill "Borovetsky" in the late second millennium BC. The first Slavic settlement was established here, mainly for the city of Moscow, in the first half of the 12th century.

The fortress of Moscow was founded by Prince Yuri Dolgoruky in 1156 . Moscow's Kremlin, under Prince Ivan Kalita, was transformed from an ordinary castle into a residence for the great princes and bishop. The people of Moscow are building in their land facilities not only of wood, but of white stones. Uspensky Cathedral was established at the highest site of Tell Borovetsky in 1326-1327 as the main church of the Principality and other cathedrals and churches, including Arkhangelsky Cathedral (Archangel Michael) where Prince Ivan Kalita and his grandsons were buried. These cathedrals, built of white stones, have been identified in the center of the Kremlin.

Under Ivan Kaleta, Moscow grew at high rates. Its headquarters on Borovetsky Hill appears not as an isolated city but as a major fortified section of the city. His current name, the Kremlin, was first mentioned in the 1331 history blogs.