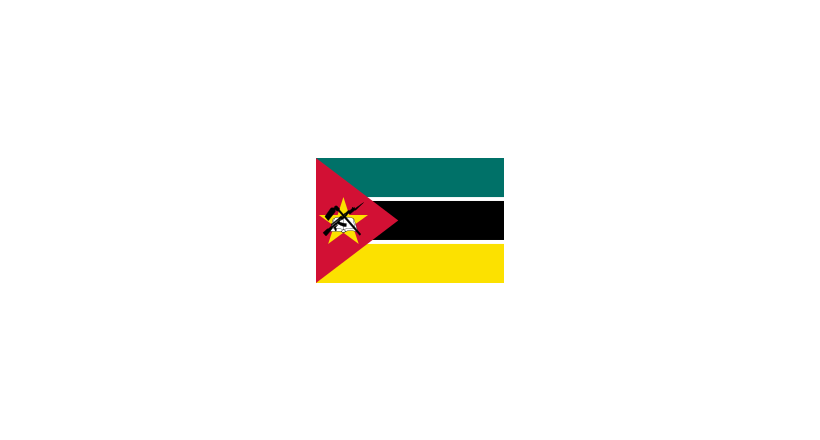 officially the Republic of Mozambique : , is a country located in Southeast Africa bordered by the Indian Ocean to the east, Tanzania to the north, Malawi and Zambia to the northwest, Zimbabwe to the west, and Eswatini (Swaziland) and South Africa to the southwest. The sovereign state is separated from the Comoros, Mayotte and Madagascar by the Mozambique Channel to the east. The capital and largest city of Mozambique is Maputo (formerly known as "Lourenço Marques" from 1876 to 1976).

Between the first and fifth centuries AD, Bantu-speaking peoples migrated to present-day Mozambique from farther north and west. Northern Mozambique lies within the monsoon trade winds of the Indian Ocean. Between the 7th and 11th centuries, a series of Swahili port towns developed here, which contributed to the development of a distinct Swahili culture and language. In the late medieval period, these towns were frequented by traders from Somalia, Ethiopia, Egypt, Arabia, Persia, and India.

The voyage of Vasco da Gama in 1498 marked the arrival of the Portuguese, who began a gradual process of colonisation and settlement in 1505. After over four centuries of Portuguese rule, Mozambique gained independence in 1975, becoming the People's Republic of Mozambique shortly thereafter. After only two years of independence, the country descended into an intense and protracted civil war lasting from 1977 to 1992. In 1994, Mozambique held its first multiparty elections, and has since remained a relatively stable presidential republic, although it still faces a low-intensity insurgency.

Mozambique is endowed with rich and extensive natural resources. The country's economy is based largely on agriculture, but industry is growing, mainly food and beverages, chemical manufacturing and aluminium and petroleum production. The tourism sector is also expanding. South Africa is Mozambique's main trading partner and source of foreign direct investment, while Belgium, Brazil, Portugal and Spain are also among the country's most important economic partners. Since 2001, Mozambique's annual average GDP growth has been among the world's highest. However, the country is still one of the poorest and most underdeveloped countries in the world,ranking low in GDP per capita, human development, measures of inequality and average life expectancy

The only official language of Mozambique is Portuguese, which is spoken mostly as a second language by about half the population. Common native languages include Makhuwa, Sena, and Swahili. The country's population of around 29 million is composed of overwhelmingly Bantu people. The largest religion in Mozambique is Christianity, with significant minorities following Islam and African traditional religions. Mozambique is a member of the United Nations, the African Union, the Commonwealth of Nations, the Organisation of the Islamic Cooperation, the Community of Portuguese Language Countries, the Non-Aligned Movement, the Southern African Development Community, and is an observer at La Francophonie.