Henry I of England 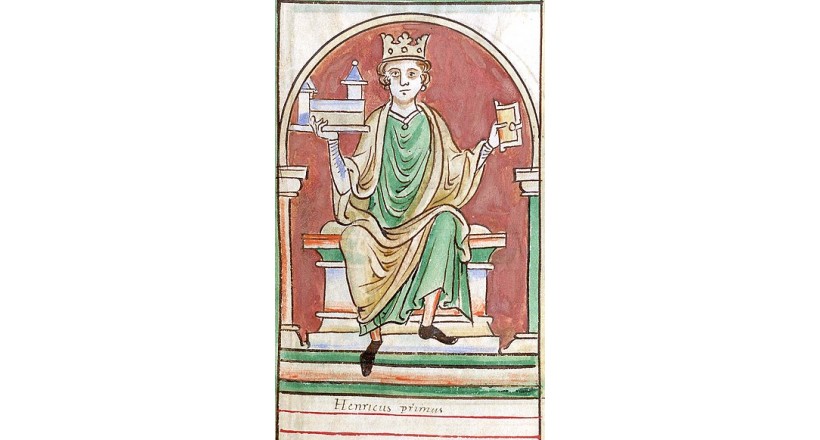 Henry I (c. 1068 – 1 December 1135), also known as Henry Beauclerc, was King of England from 1100 to his death in 1135. He was the fourth son of William the Conqueror and was educated in Latin and the liberal arts. On William's death in 1087, Henry's elder brothers Robert Curthose and William Rufus inherited Normandy and England, respectively, but Henry was left landless. He purchased the County of Cotentin in western Normandy from Robert, but his brothers deposed him in 1091. He gradually rebuilt his power base in the Cotentin and allied himself with William against Robert.

Present at the place where William died in a hunting accident in 1100, Henry seized the English throne, promising at his coronation to correct many of William's less popular policies. He married Matilda of Scotland and they had two surviving children, William Adelin and Empress Matilda; he also had many illegitimate children by his many mistresses. Robert, who invaded in 1101, disputed Henry's control of England; this military campaign ended in a negotiated settlement that confirmed Henry as king. The peace was short-lived, and Henry invaded the Duchy of Normandy in 1105 and 1106, finally defeating Robert at the Battle of Tinchebray. Henry kept Robert imprisoned for the rest of his life. Henry's control of Normandy was challenged by Louis VI of France, Baldwin VII of Flanders and Fulk V of Anjou, who promoted the rival claims of Robert's son, William Clito, and supported a major rebellion in the Duchy between 1116 and 1119. Following Henry's victory at the Battle of Brémule, a favourable peace settlement was agreed with Louis in 1120.

Considered by contemporaries to be a harsh but effective ruler, Henry skilfully manipulated the barons in England and Normandy. In England, he drew on the existing Anglo-Saxon system of justice, local government and taxation, but also strengthened it with additional institutions, including the royal exchequer and itinerant justices. Normandy was also governed through a growing system of justices and an exchequer. Many of the officials who ran Henry's system were "new men" of obscure backgrounds rather than from families of high status, who rose through the ranks as administrators. Henry encouraged ecclesiastical reform, but became embroiled in a serious dispute in 1101 with Archbishop Anselm of Canterbury, which was resolved through a compromise solution in 1105. He supported the Cluniac order and played a major role in the selection of the senior clergy in England and Normandy.

Henry's son William drowned in the White Ship disaster of 1120, throwing the royal succession into doubt. Henry took a second wife, Adeliza of Louvain, in the hope of having another son, but their marriage was childless. In response to this, he declared his daughter Matilda his heir and married her to Geoffrey of Anjou. The relationship between Henry and the couple became strained, and fighting broke out along the border with Anjou. Henry died on 1 December 1135 after a week of illness. Despite his plans for Matilda, the King was succeeded by his nephew, Stephen of Blois, resulting in a period of civil war known as the Anarchy.