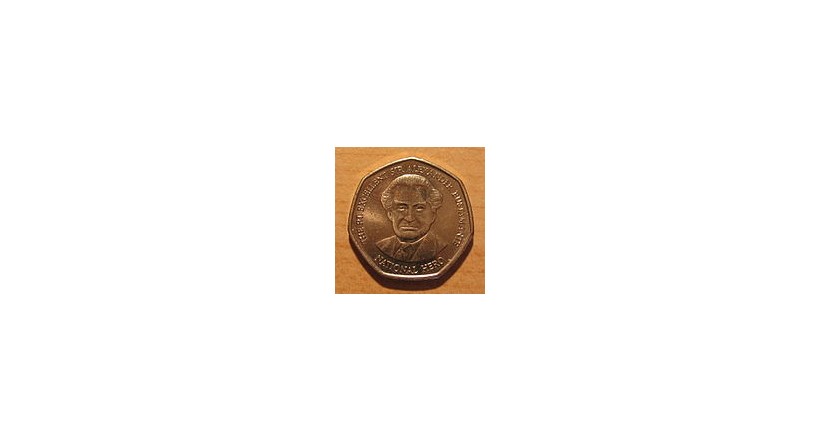 The Jamaican dollar:  has been the currency of Jamaica since 1969. It is often abbreviated to J$, the J serving to distinguish it from other dollar-denominated currencies. It is divided into 100 cents.

The earliest money in Jamaica was Spanish copper coins called maravedíes. This relates to the fact that for nearly four hundred years Spanish dollars, known as pieces of eight were in widespread use on the world's trading routes, including the Caribbean Sea region. However, following the revolutionary wars in Latin America, the source of these silver trade coins dried up. The last Spanish dollar was minted at the Potosí mint in 1825. The United Kingdom had adopted a very successful gold standard in 1821, so 1825 was an opportune time to introduce the British sterling coinage into all the British colonies.

An imperial order-in-council was passed in that year for the purposes of facilitating this aim by making sterling coinage legal tender in the colonies at the specified rating of $1 = 4s 4d (one Spanish dollar to four shillings and four pence sterling). As the sterling silver coins were attached to a gold standard, this exchange rate did not realistically represent the value of the silver in the Spanish dollars as compared to the value of the gold in the British gold sovereign, and as such, the order-in-council had the reverse effect in many colonies. It had the effect of actually driving sterling coinage out, rather than encouraging its circulation.

Remedial legislation had to be introduced in 1838 so as to change over to the more realistic rating of $1 = 4s 2d. However, in Jamaica, British Honduras, Bermuda, and later in the Bahamas also, the official rating was set aside in favour of what was known as the 'Maccaroni' tradition in which a British shilling, referred to as a 'Maccaroni', was treated as one quarter of a dollar. The common link between these four territories was the Bank of Nova Scotia which brought in the 'Maccaroni' tradition, resulting in the successful introduction of both sterling coinage and sterling accounts.