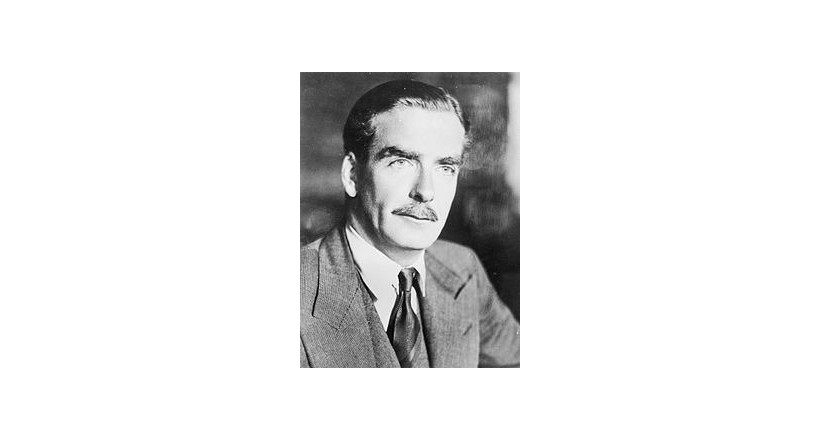 Robert Anthony Eden, 1st Earl of Avon, (12 June 1897 – 14 January 1977) was a British Conservative politician who served three periods as Foreign Secretary and then a relatively brief term as Prime Minister of the United Kingdom from 1955 to 1957

Achieving rapid promotion as a young Member of Parliament, he became Foreign Secretary aged 38, before resigning in protest at Neville Chamberlain's appeasement policy towards Mussolini's Italy. He again held that position for most of the Second World War, and a third time in the early 1950s. Having been deputy to Winston Churchill for almost 15 years, he succeeded him as the Leader of the Conservative Party and Prime Minister in April 1955, and a month later won a general election.

Eden's worldwide reputation as an opponent of appeasement, a "man of peace", and a skilled diplomat was overshadowed in 1956 when the United States refused to support the Anglo-French military response to the Suez Crisis, which critics across party lines regarded as an historic setback for British foreign policy, signalling the end of British predominance in the Middle East.Most historians argue that he made a series of blunders, especially not realising the depth of American opposition to military action.Two months after ordering an end to the Suez operation, he resigned as Prime Minister on grounds of ill health and because he was widely suspected of having misled the House of Commons over the degree of collusion with France and Israel.

Eden is generally ranked among the least successful British prime ministers of the 20th century,[7] although two broadly sympathetic biographies (in 1986 and 2003) have gone some way to shifting the balance of opinion. Biographer D. R. Thorpe described the Suez Crisis as "a truly tragic end to his premiership, and one that came to assume a disproportionate importance in any assessment of his career."