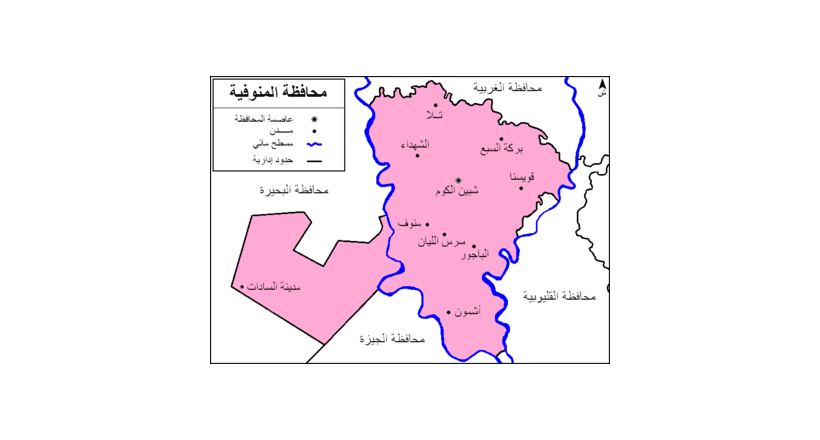 The governorate of Menoufia, an Egyptian province, is located north of the capital Cairo in the south of the Nile Delta. Its capital is Shebin El-Koum, and its largest city is Sadat City, which was cut off from Beheira Governorate in 1991 (27 years ago). Km². About half the area of ​​the province is located between the two branches of the Nile River Damietta and Rashid, while the other half extends as a desert front west of the branch of Rashid to include the center of Sadat, the largest centers of the province. Menoufia consists of nine administrative centers, comprising 10 cities: Shebin El Koum, Menouf, Sadat City, Sars El Lian, Ashmoun, El Bajour, Quesna, El Baraka, Tala, The illiteracy rate in Menoufia governorate is 36.7% of the total population. Menoufia University is one of the most important educational institutions in the governorate. It was established by Presidential Decree in 1976. Another university in Sadat City was established by the Presidential Decree of 2013 on behalf of Sadat City University Branch of Menoufia University. The main economic activity of the inhabitants of the province is agriculture, because the ancient Monufia lands between the two sub-branches of the Nile are characterized by soil fertility and the abundance of irrigation water permanently from the Nile River, as well as agriculture located in the desert of Sadat Center through land reclamation. The province has all types of cash crops, vegetables and fruit. The industrial activity also contributes strongly to agricultural activity, especially after the annexation of the city of Sadat to the province which is one of the largest industrial cities in Egypt, and there are other industrial areas in the city of Qweisna next to light industries in Shebin El Koum The governorate of Menoufia ranked eleventh in 2006 in the order of the Egyptian governorates located in the Nile Valley and the Delta in terms of quality of life and upgrading the level of services. The first is the Cairo-Alexandria agricultural road and the second is the Cairo-Alexandria desert road. Most of the remaining Monufia roads suffer from poor conditions and neglect, despite the large number of transport links that reach most of the governorate.