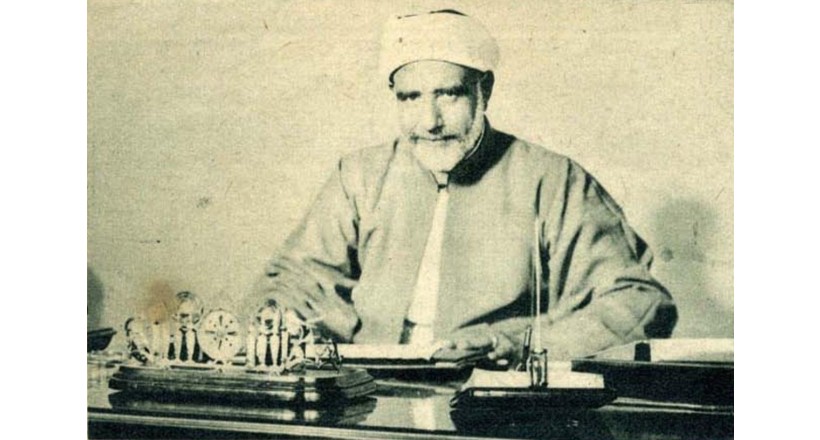 Muhammad Mustafa Al-Maraghi (1881-1945) Azhari scholar and legal judge of Egypt, he served as Sheikh of Al-Azhar from 1928 until his resignation in 1930 and then took the post again in 1935 until his death on the night of 14 Ramadan 1364 AH corresponding to 22 August 1945. Mohammed bin Mustafa bin Mohammed bin Abdul Moneim Almraghi Judge Al-Husseini from the center of Maragha, Sohag governorate in Upper Egypt. He was born on the 7th of Rabee Al-Akhar 1298 AH corresponding to March 9, 1881. And ends the ratio of Sharif to Hussein bin Ali and Fatima Zahra daughter of the Prophet Muhammad peace be upon him. He had a degree of knowledge and culture, memorizing the Koran, and learned a share of general knowledge and his answer was sent by his father to seek knowledge at Al-Azhar in Cairo, he received the flag of a constellation of his scientists and influenced by the members of the current regenerated, including young Sheikh Ali Salhi, who studied Arabic science, and influenced his style in the statement And expression. He called on Sheikh Mohammed Abdo and was a qualitative shift that determined his scientific status, and his future in the school of revival and renewal and reform has been taught on the lectures of the Imam in the interpretation of the Koran, and influenced by the methodology of Tawhid and what he sees purification of Islamic beliefs of the luxury of old speakers, as well as the rhetoric and Arabic language known shift In the method of submission in his time has become one of the most important flags of Egypt and the Islamic world and one of the most important form of laws and legislative track, and the national and has contributed to great efforts to take Al-Azhar status Despite the few books After Sheikh Imam Mohammed Mustafa al-Maraghi returned from Sudan, he held important judicial positions Head of Forensic Inspection at the Ministry of Justice (Justice) on 9 October 1919. President of the Egyptian Court of Sharia on 21 July 1920. Member of the Supreme Shari'a Court on 27 January 1921. President of the Supreme Court of Sharia on 11 December 1923. He held these major judicial positions between 1919 and 1928. In these positions he made several important reforms. He ordered the formation of a committee to regulate personal status under his chairmanship. He directed the committee not to adhere to the doctrine of Imam Abu Hanifa if he found in others what suits the general interest of society. Before that, they were bound by the doctrine of the great Imam Abu Haneefah. He made them recite from the other schools of thought and from the views of those who diligently applied to the time and place. He was thus able to undertake numerous reforms in the Islamic family. In July 1920 he issued the Personal Status Law