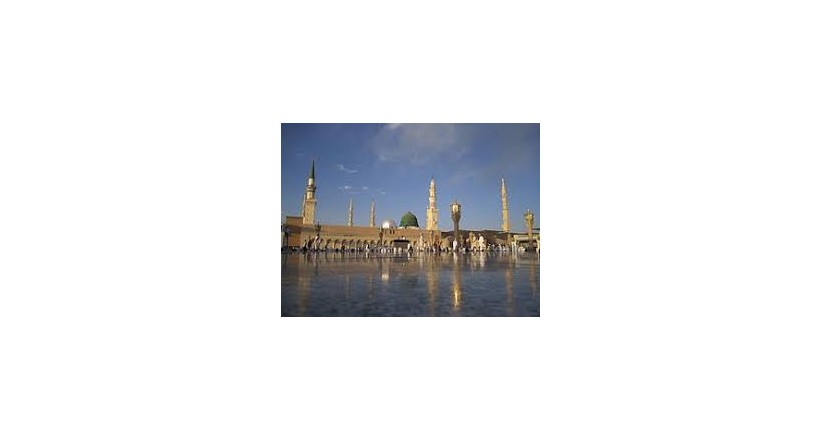 Al-Masjid an-Nabawī  is a mosque established and originally built by the Islamic prophet Muhammad  situated in the city of Medina in Saudi Arabia. Al-Masjid an-Nabawi was the third mosque built in the history of Islam and is now one of the largest mosques in the world  It is the second-holiest site in Islam, after Masjid al-Haram in Makkah It is always open, regardless of date or time

The site was originally adjacent to Muhammad's house  he settled there after his Hijra (emigration) to Medina in 622 CE. He shared in the heavy work of construction. The original mosque was an open-air building. The mosque served as a community center, a court, and a religious school. There was a raised platform for the people who taught the Quran. Subsequent Islamic rulers greatly expanded and decorated it. In 1909 it became the first place in the Arabian Peninsula to be provided with electrical lights. The mosque is under the control of the Custodian of the Two Holy Mosques. The mosque is located in what was traditionally the center of Medina, with many hotels and old markets nearby. It is a major pilgrimage site. Many pilgrims who perform the Hajj go on to Medina to visit the mosque due to its connections to the life of Muhammad

After an expansion during the reign of the Umayyad caliph al-Walid I, it now incorporates the final resting place of Muhammad and the first two Rashidun caliphsAbu Bakr and Umar.[10] One of the most notable features of the site is the Green Dome in the south-east corner of the mosque,  originally Aisha's house where the tomb of Muhammad is located. In 1279, a wooden cupola was built over the tomb which was later rebuilt and renovated multiple times in late 15th century and once in 1817. The current dome was added in 1818 by the Ottoman sultan Mahmud II  and it was first painted green in 1837 hence becoming known as the Green Dome