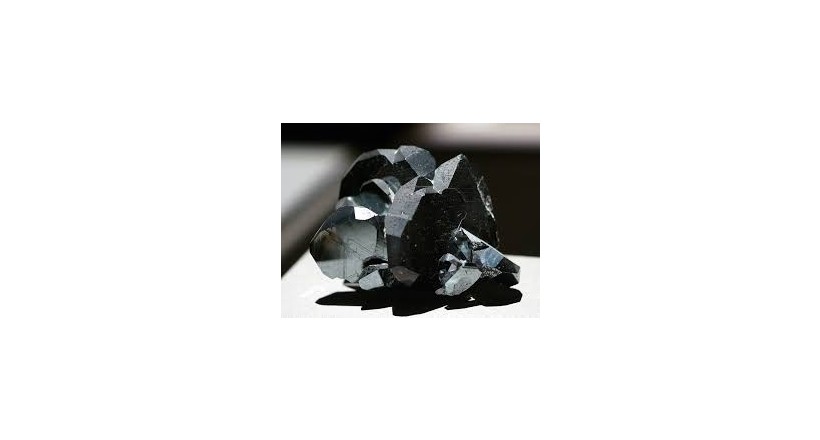 The hematite stone, also known as the Chinese Ironstone of the Arabs, is one of the thick, gray-black and red-brown gemstones in its raw form. It was also found on the surface of Mars in the first expedition of mini- On its board in 2001. It is made up of triangular iron oxide and is estimated to be 5.5 to 6.5 on the Mohawk scale. It is a family of natural metal oxide. It is characterized by metallic luster unlike most other iron types. It is also characterized by its high density and high refractive index. Anodized aluminum, zircon and even diamonds

The Chinese iron hematite stone, whose chemical formula Fe 2 O 3 is not light, is completely opaque and is one of its distinguishing features, except if it is made in the form of low-thickness strips. It is found in many places below the soil and in the rocks. With other minerals including pyrite, marquise, calcite and albat.Looking at its crystalline structure, we find that it is also characterized by thickness that is identical to the installation of aluminum and aluminum oxide crystal

The stone is similar to many of the other gemstones, but it differs in terms of composition, such as pyrite and Marxite stones, which appear to be similar in their metallic gloss and different in their chemical composition. It is worth noting that the Chinese iron impurities may be a factor in many cases in changing the characteristics of other gemstones in terms of color, such as what happens in Garnett stones and rubies

Places of origin and extraction

Hematite is the main source of iron in the United States of America with an estimated 90% of the extract there. Hematite stone or Chinese iron stone is produced in many countries of the world, some of which are the state of Minas Grays in Brazil and the province of Cumbria in England and the island of Alba of Italy .

It is also produced with high quality from the countries of Morocco, North Africa, Bangladesh, China, New Zealand, the Czech Republic, the United States of America (Minnesota, Michigan, Arizona and New York).

The name of the hematite stone refers to the Greek word "blood" because of the red color in some of its varieties. It should not be confused with the famous blood stone , which is one of the types of quartz. When we discover the source and meaning of the word Hematite in English, it is descended from the French word, which is similar to the spelling, as it descended from the Latin word "Lapis Hematites" in the fifteenth century, which is also derived from the ancient Greek word meaning "red blood stone".

While the discovery of the source of the name "Chinese iron stone" in Arabic, it is due to cultural exchange and trade between the Arab region and China.Although the stone is called "Chinese" is not limited to production only in China, but extends to many countries of the world as we mentioned in the places of existence and extraction

Large quantities of hematite were found in mines located on the island of Alba in the Mediterranean Sea. It should be noted that the use of that stone in the dye industry in ancient times, but recently has been directed to other alternatives more economically feasible

The popularity of the Chinese iron hematite stone in Europe during the Victorian period was also popular for use in gold plating and gemstone industry, as well as decoration, engravings and necklaces.

There are many beliefs and myths about the benefits of hematite stone, especially therapeutic and healing, as it was known for its ability to improve the flow of blood and oxygen in the body beside the elimination of symptoms of fever and inflammation and the transmission of a sense of comfort and tranquility in the body.

It is also known to help calm the mind, improve focus and think wisely according to ancient Chinese beliefs, as well as instill a sense of energy and body health when worn.

The Chinese iron stone symbolizes Mars in the field of astronomy, and is known by Arab legends as its ability to protect, spread blessing and prevent envy according to some ancient writings.

The installation of three-faceted "Chinese iron" hematite, such as sapphires and sapphires . In addition, its strength is stronger than that of pure iron, similar to opal and turquoise . Hematite and hematite are sometimes confused with magnetism. Natural hematite is not magnetic, but it can be magnetized by subjecting it to a process of heating and cooling while connected to a strong magnet.

Chinese hematite stone or stone is one of the most commonly used stones in the jewelry and gemstone industry around the world, with the exception of some Arab countries, which are frequently used for this type of stone because of the beliefs and legends spread about its benefits.

The Chinese iron hematite stone is usually not processed before it is used in the jewelry industry, but it is usually treated with heat when used in the manufacture of commercially diverse jewelry.

It is possible to find this stone using various types of jewelry, from the rings inlaid to the necklaces and amulets. In terms of price, it is available at less than $ 100 a lot in many stores and is purchased based on size and not carat weight, it should be noted here that the inscriptions and the ring itself or the locker, whether it is made of gold or silver factor affecting the price of the ring must Take it into account.

It is usual to find some inscriptions on the surface of this stone, whether the words or drawings have to do with the myths prevailing in the areas where the sale.

Although hematite is not as solid as it is, it is durable for long periods of time and is especially suitable for men's jewelry including neck ties and stylish buttons.

It is recommended to avoid the use of ultrasound, steam, chemicals, acids and active liquids in the cleaning of the Chinese iron hematite, which is cleaned with a little warm water on a piece of cloth and then dried well after that and save it away from other precious stones .