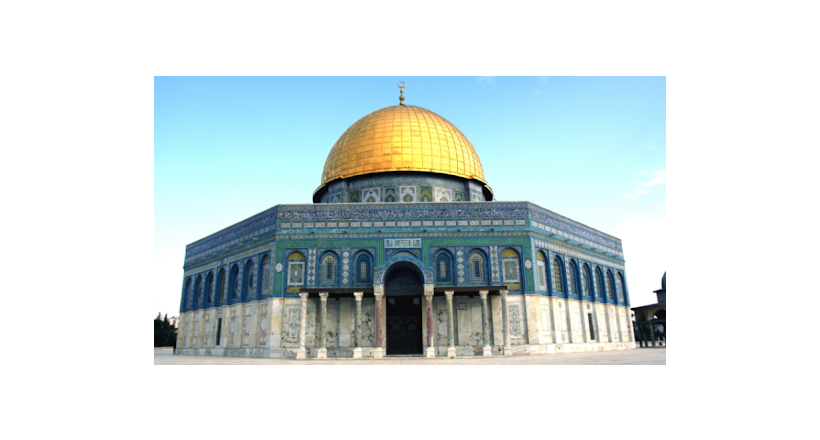 Al-Aqsa Mosque is one of the largest mosques in the world and one of the three mosques that Muslims tend to travel to, and it is also the first of the two qiblahs in Islam. It is located inside the Old City of Jerusalem in Palestine. It is the entire walled area and a name for everything inside the wall of the Al-Aqsa Mosque, located in the far southeast corner of the Old Walled City.

Its area is about 144,000 square meters, and it includes the Dome of the Rock, the Qibli Mosque, the Marwani Chapel, the Bab al-Rahma chapel, and several other landmarks up to 200 landmarks. The Al-Aqsa Mosque is located on a small plateau called "Moria Plateau," and the rock is its highest point, and is located in its heart.

Said Al-Aqsa Mosque in the Qur'an: Praise the prisoners at night Babdh from the Grand Mosque to Al-Aqsa Mosque, which blessed us around to show him of Our Signs, He is the Hearing, the Seeing 1 Qur'an Al-Isra, verse 1. It is one of the three mosques that people may travel, as the Prophet of Islam Mohammad .

The Jews also revere the place itself, and they call the squares of the Al-Aqsa Mosque the "Temple Mount" in reference to the Temple of the Prophet Solomon, and many extremist Jewish organizations try to invoke this argument for building the Temple according to their belief.

Al-Aqsa Mosque: The word “Al-Aqsa” means the farthest, and it was called the maximum because of the distance between it and the Grand Mosque, and the most distant mosque from the people of Mecca on earth was venerated by visiting. Which he called this according to the name of the Islamic faith of God in the Quran, in verse: Praise the prisoners at night Babdh from the Sacred Mosque to the Al-Aqsa Mosque, which blessed us around to show him of Our Signs, He is the Hearing, the Seeing 1 Surat Al-Isra, Verse: 1.

The Holy House: The word "holy" means the blessed and the cleansed, and Muslim scholars and their poets mentioned this name frequently, as Imam Ibn Hajar Al-Asqalani said:

To the Holy House we have brought the tenderness of the immortality, from Karim

Bayt Al-Maqdis: It is the name that was known before it was called “Al-Masjid Al-Aqsa” in the Holy Quran, and this name is used in most of the hadiths of the Prophet Muhammad, such as what he said on the Day of Israa and Mi'raj: One of us has two rak'ahs »