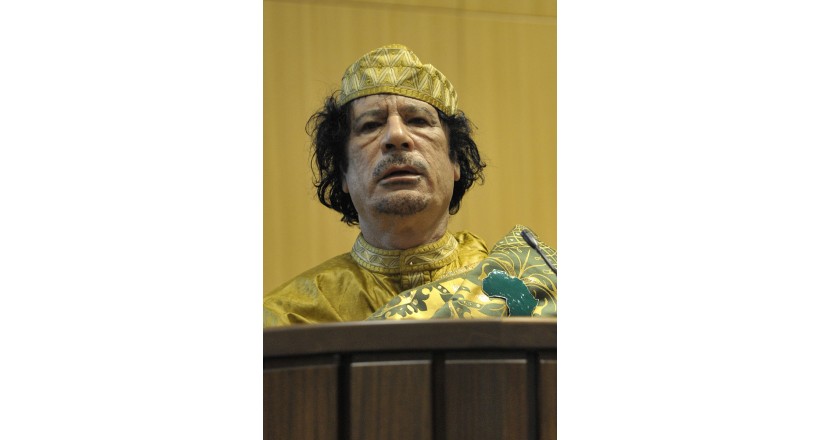 Muammar Muhammad Abd al-Salam al-Gaddafi ( June 7, 1942 - October 20, 2011 ). Known as Colonel Gaddafi . He was a Libyan politician and revolutionary who ruled Libya for more than 42 years. Firstly, as Chairman of the Revolutionary Command Council in the Libyan Arab Republic 1969 - 1977 . After that, he became known as the Leader Brother of the Great Socialist People's Libyan Arab Jamahiriya 1977-2011 . Gaddafi rose to power in a military coup that ousted King Idris , King of the Kingdom of Libya in 1969 and remained president of the Revolutionary Command Council until 1977When he formally stepped down from the presidency of the Revolutionary Command Council and designated himself "Leader of the Revolution." In 2008 he held a meeting of African leaders and was granted the title of "King of Kings of Africa" ​​and a major defender of the United States of Africa , and he served as President of the African Union from February 2, 2009 to January 31, 2010 .Gaddafi replaced the Libyan Constitution of 1951 with laws based on a political doctrine called the Third World Theory , which was published in the Green Book . After establishing the Jamahiriya in 1977, he formally resigned from his position and subsequently had a largely symbolic role on the General People's Committee . Rising oil prices and extraction in Libya increased revenues. By exporting oil in quantities and a high per capita rate, in addition to various social welfare programs, Libya achieved the highest standards in the records of the development index compared to African countries and remained debt-free.