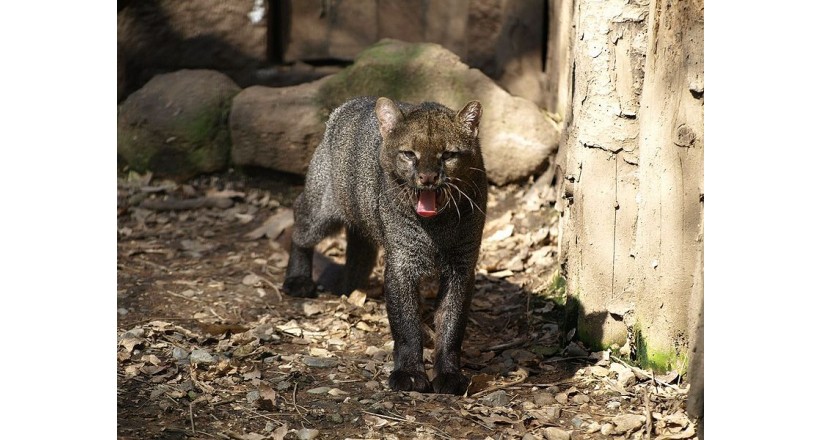 The jaguarundi (Herpailurus yagouaroundi) (/ˌʒæɡwəˈrʌndi/ ZHAG-wə-RUN-dee) or eyra is a small wild cat native to southern North America and South America. It has been listed as Least Concern on the IUCN Red List since 2002. The megareserves of the Amazon Basin are probably the only conservation units that can sustain long-term viable populations. In some Spanish-speaking countries, the jaguarundi is also called gato colorado, gato moro, león brenero, tigrillo, and leoncillo. The Brazilian Portuguese pronunciation of its common English and Portuguese name is [ʒɐɡwɐɾũˈdʒi]. It is also called gato-mourisco, eirá, gato-preto, and maracajá-preto in Portuguese. Jaguarundi comes from Old Tupi yawaum'di.

The jaguarundi has short legs, an elongated body, and a long tail. The ears are short and rounded. The coat is without spots, uniform in color, with, at most, a few faint markings on the face and underside. The coat can be either blackish to brownish-grey (grey morph) or foxy red to chestnut (red morph); individuals of both morphs can be born in the same litter. It has a length of 53 to 77 centimetres (21 to 30 inches) with a 31-to-60 cm-long tail (12-to-24 in), and weighs 3.5 to 9.1 kilograms (7.7 to 20.1 lb).