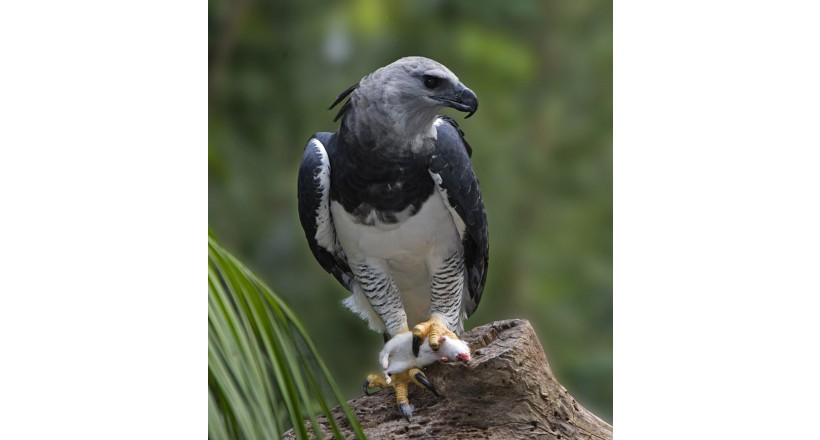 eagle (Harpia harpyja) is a neotropical species of eagle. It is also called the American harpy eagle to distinguish it from the Papuan eagle, which is sometimes known as the New Guinea harpy eagle or Papuan harpy eagle. It is the largest and most powerful raptor found in the rainforest, and among the largest extant species of eagles in the world. It usually inhabits tropical lowland rainforests in the upper (emergent) canopy layer. Destruction of its natural habitat has caused it to vanish from many parts of its former range, and it is nearly extirpated in Central America. In Brazil, the harpy eagle is also known as royal-hawk (in Portuguese: gavião-real).

The harpy eagle was first described by Linnaeus in his Systema Naturae in 1758 as Vultur harpyja, after the mythological beast harpy. The only member of the genus Harpia, the harpy eagle is most closely related to the crested eagle (Morphnus guianensis) and the New Guinea harpy eagle (Harpyopsis novaeguineae), the three composing the subfamily Harpiinae within the large family Accipitridae. Previously thought to be closely related, the Philippine eagle has been shown by DNA analysis to belong elsewhere in the raptor family, as it is related to the Circaetinae.

The species name harpyja and the word harpy in the common name harpy eagle both come from Ancient Greek harpyia (ἅρπυια). They refer to the Harpies of Ancient Greek mythology. These were wind spirits that took the dead to Hades or Tartarus, and were said to have a body like a vulture and the face of a woman.