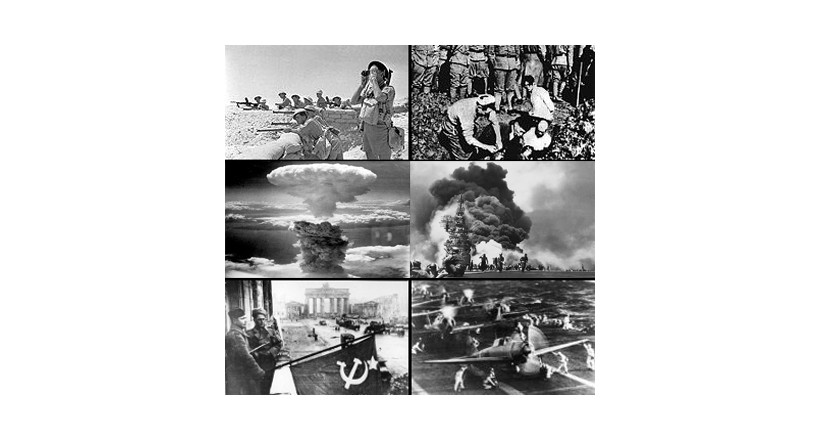 The Second World War is an international war that started on the first of September 1939 in Europe and ended on the second of September 1945 , in which the vast majority of the countries of the world participated, including the great countries in two conflicting military allies: the Allied Forces and the Axis countries , and it is also the broader war In history, more than 100 million people from more than 30 countries have participated directly in it, and the major countries have put all their military, economic, industrial and scientific capabilities in the service of the war effort. The Second World War was marked by a large number of civilian deaths,  the strategic bombing that killed about one million people, including the two atomic bombs that were dropped on Hiroshima and Nagasaki ,  war resulted in between 50 and 85 million deaths, according to estimates. Therefore, World War II is the bloodiest war in human history.

The Japanese Empire had declared war on the Republic of China on July 7, 1937 , as it aimed to take control of Asia and the Pacific ,  but the actual beginning of the war was on September 1, 1939 , when Germany invaded Poland , and rolled back Then declarations of war on Germany by France and the United Kingdom . From late 1939 to early 1941 , Nazi Germany controlled a large area of ​​the continent of Europe after a series of military campaigns, and formed the Alliance of Axis Powers with Italy and Japan, and they also agreed with the Soviet Union to share the neighboring lands: Poland , Finland , Romania , and other countries. Baltic . The primary battle in the war remained between the Axis powers on the one hand, and the United Kingdom alongside the Commonwealth countries on the other, in addition to a campaign in North Africa and another campaign in East Africa , in addition to the Berlin air battle , the London bombing , the Balkan campaign , and the Battle of the Atlantic . In June 1941, the Axis Alliance invaded the Soviet Union in what is known as the Barbarossa process , which ignited the Eastern Front , the largest theater of war in history, which made the major Axis powers in a war of attrition , and Japan in December 1941 attacked the Pearl Harbor , It also attacked the British region of Malaya in the Pacific Ocean, quickly controlling a large part of the western Pacific Ocean.

Axis progress stopped in 1942 , when Japan lost the Battle of Midway near the American state of Hawaii , and Germany lost in the second battle of El Alamein in North Africa, as the Soviet Union defeated it decisively in the Battle of Stalingrad , and in 1943, Germany received a series of defeats on the Eastern Front. And the Allies invaded Sicily , and the invasion of Italy that led to the surrender of Italy, in addition to the Allied victories in the Pacific Ocean, the Axis Powers lost the initiative and started a strategic retreat on all fronts. In 1944, the allies liberated France in what is known as the Normandy landing , while the Soviet Union regained all the territories it had lost and invaded Germany and its allies. In 1944 and 1945, Japan retreated in south-central China and in the Burma campaign , while the allies paralyzed the Japanese imperial navy and took control of the main islands in the Pacific Ocean.

The war in Europe ended with the Allied invasion of Germany, the Soviet Union's control of Berlin and the unconditional surrender of Germany on May 8, 1945 . Then the Potsdam Conference was held near Berlin , during which the Potsdam Proclamation was issued on June 26, 1945 , and the United States on August 6 and August 9 of 1945 threw two nuclear bombs on Hiroshima and Nagasaki (respectively), followed by the surrender of Japan on August 15, 1945 .

The Second World War changed the political and military map and social structure in the world, also led to the establishment of the United Nations to enhance international cooperation and prevent future conflicts, and the victorious countries in the war: the United States , the Soviet Union, China , the United Kingdom , and France became permanent members of the United Nations Security Council, While the United States and the Soviet Union have emerged as the major powers on the international stage, the influence of European powers has receded, and this paved the way for the Cold War, which continued in the next 46 years. As for the major European countries, their influence has diminished. Independence movements started in Asia and Africa. Countries affected by industry have tended to reform their economic situation, but specifically at the political level in Europe, an integration phase has begun in an effort to avoid hostilities that cause wars, and that Europeans have a common identity.