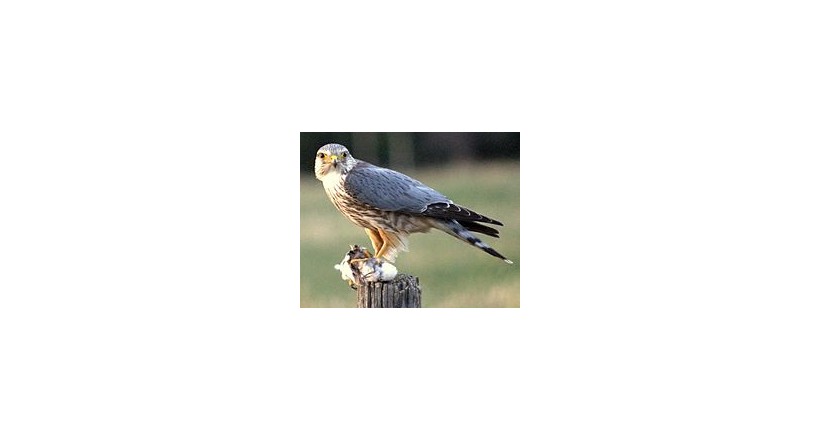 The merlin (Falco columbarius) is a small species of falcon from the Northern Hemisphere, with numerous subspecies throughout North America and Eurasia. A bird of prey once known colloquially as a pigeon hawk in North America, the merlin breeds in the northern Holarctic; some migrate to subtropical and northern tropical regions in winter. Males typically have wingspans of 53–58 centimetres (21–23 in), with females being slightly larger. They are swift fliers and skilled hunters who specialize in preying on small birds in the size range of sparrows to quail. The merlin has for centuries been well regarded as a falconry bird. In recent decades merlin populations in North America have been significantly increasing, with some merlins becoming so well adapted to city life that they forgo migration.

The merlin was described and illustrated by the English naturalist Mark Catesby (as the "pigeon hawk") in his Natural history of Carolina, Florida and the Bahama Islands published in 1729–1732. Based on this description, in 1758 Carl Linnaeus included the species in the tenth edition of his Systema Naturae and introduced the present binomial name Falco columbarius with the type locality as "America". The genus name is Late Latin; falco derives from falx, falcis, a sickle, referring to the claws of the bird. The species name columbarius is Latin for "of doves" from "columba", "dove". Thirteen years after Linnaeus's description Marmaduke Tunstall recognized the Eurasian birds as a distinct taxon Falco aesalon in his Ornithologica Britannica. If two species of merlins are recognized, the Old World birds would thus bear the scientific name F. aesalon.

The name "merlin" is derived from Old French esmerillon via Anglo-Norman merilun or meriliun. There are related Germanic words derived through older forms such as Middle Dutch smeerle, Old High German smerle and Old Icelandic smyrill. Wycliffe's Bible, around 1382, mentions An Egle, & agriffyn, & a merlyon.The species was once known as 'pigeon hawk' in North America.