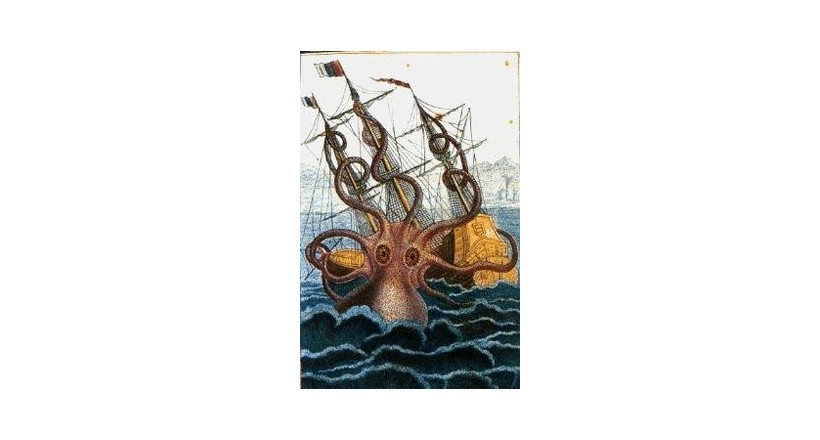 An unknown species of gigantic octopus has been hypothesised as a source of reports of sea monsters such as the lusca, kraken and akkorokamui as well as the source of some of the carcasses of unidentified origin known as globsters like the St. Augustine Monster. The species that the St. Augustine carcass supposedly represented has been assigned the binomial names "Octopus giganteus" (Latin: giant octopus) and "Otoctopus giganteus" (Greek prefix: oton = ear; giant-eared octopus), although these are not valid under the rules of the ICZN.

They are not to be confused with the known giant Pacific octopus, which is a member of the genus Enteroctopus, and can grow to a total length of more than 6 m (20 ft). The gigantic octopus is assumed to be much larger.

In 1802, the French malacologist Pierre Denys de Montfort in Histoire Naturelle Générale et Particulière des Mollusques, an encyclopedic description of mollusks, recognized the existence of two kinds of giant octopus. One being the kraken octopus, which Denys de Montfort believed had been described not only by Norwegian sailors and American whalers, but also by ancient writers such as Pliny the Elder. The second one being the much larger colossal octopus (the one actually depicted by the image) which reportedly attacked a sailing vessel from Saint-Malo off the coast of Angola.

A gigantic octopus has been proposed as an identity for the large carcass, known as the St. Augustine Monster, that washed up in St Augustine, Florida, in 1896. However, samples of this specimen subjected to electron microscopy and biochemical analysis were found to be "masses of virtually pure collagen" and not to have the "biochemical characteristics of invertebrate collagen, nor the collagen fiber arrangement of octopus mantle". The results suggest the samples are "large pieces of vertebrate skin ... from a huge homeotherm