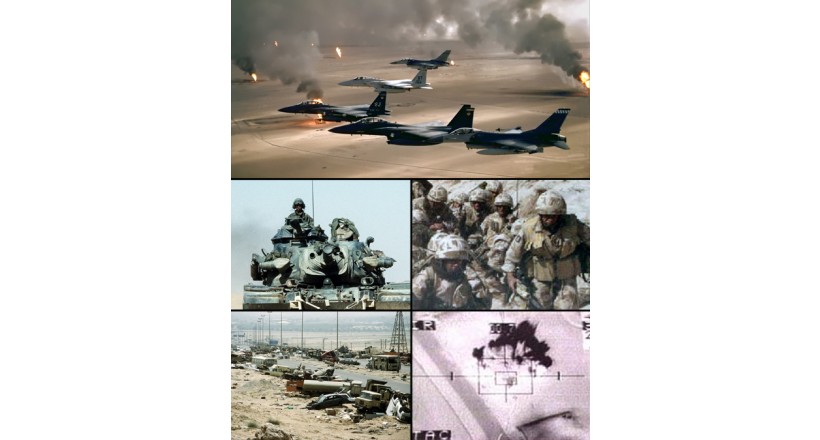 The Second Gulf War , or the Mother of Battles ,  or the War of Liberation of Kuwait , also called military operation Desert Shield (for the period from 7 August 1990 to 17 January 1991) and then Operation Desert Storm (for the period from 17 January to 28 February 1991)  was a war waged by the 34-nation coalition led by the United States against Iraq after obtaining United Nations permission to liberate Kuwait from Iraqi occupation .

The conflict developed in the context of the first Gulf War , and in 1990 Iraq accused Kuwait of stealing oil through drilling in a tilted way.  When Iraq invaded Kuwait, economic sanctions were imposed on Iraq and the Security Council demanded that Iraqi forces withdraw from Kuwait unconditionally. The United States and Britain prepared for the war, and began the process of liberating Kuwait from Iraqi forces on January 17, 1991, where the operations achieved an important victory paved the coalition forces to enter into parts of Iraq, and focused the ground and air attack on Kuwait, Iraq and parts of the border with Saudi Arabia, and Iraqi forces Retaliated by firing a number of Scud missiles at Israel and the Saudi capital Riyadh.

The Iran-Iraq War was named after Saddam's Qadisiyah was also called the First Gulf War . This war was called the Second Gulf War, but is sometimes called the Gulf War or the First Gulf War . The invasion of Iraq in 2003 ,  United States calls this war the name Desert Operation Storm ; people, especially Westerners, often mistake it and believe this is the name of the entire conflict, even though the United States Postal Service issued a 1992 stamp the name of "operation desert storm" in leaves no room for doubt that this name alone operation only, as granted US Army "campaign medals" ( in English : campaign ribbons) for those who participated in the service of Southwest Asia .