Currency in the Islamic Era 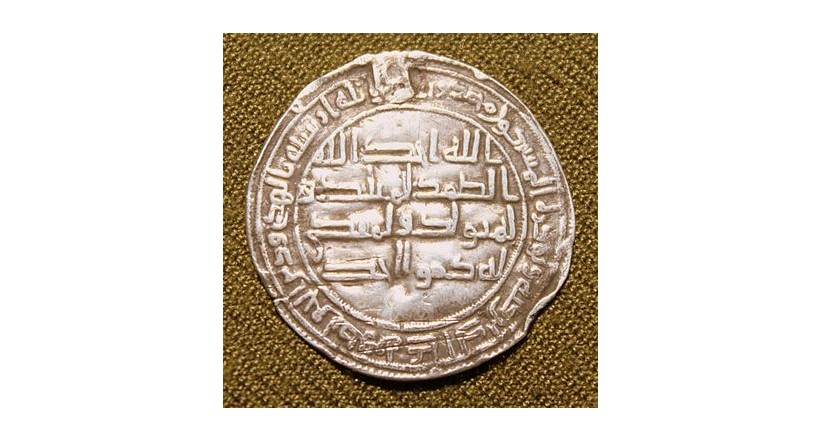 Currencies circulating in the Arab Peninsula in pre-Islamic times used to come with the commercial caravans most importantly two commercial trips by the tribe of Quraysh to Syria and to Yemen . The two trips are mentioned in the Holy Quran in 'surat Quraysh' In the name of Allah the most graceful the most merciful  " for the accustomed security of the Quraysh – Their accustomed security ( in ) the caravan of winter and summer " . The main coins were the Byzantine dinar made of gold and called eye and the Sassanid Persian dirham made of silver and called ( Al Wareq ) and after the emergence of Islam in the Arab Peninsula , Muslims didn't have their own coins . Prophet Mohamed – may Allah honor him and grant him peace acknowledged the use of the Byzantine and Sassanid coins though they bore symbols that contradicted the spirit of Islam .

The silver Sassanid dirhams circulating in the rise of Islam were of two types the Baghlya dirhams that were named the sufficient blacks and weighed eight dawanik and the Tiberian dirhams called the ancient and weighed four dawanik . This difference in weight created a problem in paying the zakat and the tribute so it was agreed that the Islamic legal weight of the dirham be six dawanik wich is the average weight of the two dirhams ( the mule and the tiberian ) it is attributed to Ali may Allah honor his face saying the Proghet of Allah made me marry his daughter Fatema – peace be upon her – and the dowry was 480 dirhams each weighing six dawanik .

After the death of the Prophet may Allah honor him and grant him peace the first Caliph Abu-Bakr El-Seddik may Allah be pleased with him – ducceeded him from 11 to 13 AH / 632 to 634 AD . He followed the Sunnah of the prophet and acknowledged the use of Byzantine and Sassanid currency without incurring any changes on them .

After the death of Abu Bakr the second Caliph Omar Ibn El-Khattab may Allah be pleased with him took over from 13 to 23 Ah/634 to 644 AD. In his time the conquests started and Damascus  Palestine and Tiberius were conquered . Muslims defeated the Persians in the battle of Qadeseya and the Islamic conquest reached Nahawand , Asbahan , Azerbajjan , Basra and Kufa , Egypt as well was conquered during his time in 20 Ah /641 AD by the Islamic leader Amr Ibn El As . The use of Byzantine Dinars and Sassanid Dirhams continued in the time of Omar Ibn El-Khattab yet he added to some of the silver mints starting the year 18 AH , Arabic inscription of phrases like in the Name of Allah and Good . By this Omar Ibn El – Khattab became the first to add Arabic phrases and words on Sassanid mints .

Upon the assassination of Omar Ibn El-Khattab by Abi Louloua El-Farsi ( the Magian ) , Osman Ibn Affan may God be pleased with him became the third Caliph 23-35 AH / 644-655 AD ) . Islam widely spread during his time and many countries were conquered such as Tunisia ,Kerman , Sajistan and Armenia and the Muslim armies reached Constantinople under his reign . During the era of Osman other Arabic phrases were added to the silver mints that followed the Sassanid design like " in the name of Allah my lord " , " in the name of Allah my king " , Allah and Baraka

After the Killing of Osman Ibn Affan by the Kharijites the fourth of the Rightly –Guided Caliphs , Ali Ibn Abi Taleb may Allah honor his face succeeded him 35-40 AH / 655-661AD . The minting of coins on the Sassanid model went on and the coins carried the same Arabic phrases used previously in addition to a new phrase the advocate of Allah

Ater the end of the Rightly – Guided Caliphs era the Umayyad state was established in 41 AH / 661 AD and its first Caliph was Muawya Ibn Abi-Sufian . The capital and the seat of the Caliph was Damascus and Caaliph Muawya paid much attention to coins and minted two types of silver dirhams the first is similar to those of the Rightly – Guided Caliphs i.e following the Sassanid style in addition to some Arabic phrases like in the name of Allah , my lord and thank God – Baraka . And the second followed also the Sassanid style but bearing Fahlavi letters Muawya Emir of Oroshinkan wich means Muawya the prince of the Believers . Maqrizi mentions that Muawya Ibn Abi Sufian was the first to mint gold dinars bearing his picture holding a sword . However those dinars cannot be found and were not even documented in any reference . They might have been melted during the monetary reform during the time of Abdel-Malik Ibn Marawan

After the death of Muawya minting of coins went on almost same as before till the beginning of the reign of Fifth Umayyad Caliph Abdul – Malik Ibn Marawan who was Caliph 65-86 AD / 684-705 AD . He was able to unite the Islamic nation and succeeded in Arabizing all government departments in the various Islamic countries . His reign witnessed massive monetary reform Arab Islamic coins were designed and produced for the first time and Arab and non-Arab historians agreed that Abdul-Malik Ibn Marawan was the first to mint coins fully in Arabic and independent of foreign coins ( Byzantine and Sassanid ) . However they disagreed regarding the reason why Ibn Marawan did so though it was pretty logical that after uniting the nation and ending civil strife he had to Arabize the government diwans and the currency so as to reflect the new status . Ibn Marawan unified the legitimate weight of the dinar fixing it at 4.25 grams and it is worth nothing that gold coins after the Arabization were only minted in the Mint House of Damascus Syria and in the Mint House of Fustst Egypt

Since that time the Egyptian currency was based on the dinar and its parts the dirham and its parts the fils and half fils . Those were the official currencies thoughout different eras regardless of changes in the official structure of the state and the change of rulers through the eras of the Abbasids fatimids , Ayyubids , Bahari Memluks and Circassian Memluks . The monetary system of Egypt changed only with the Ottoman invasion in the time of Sultan Selim I in 2 AH/ 1517 AD  . The minting of dinars , dirhams and felses was then stopped and coins were minted according to the Ottoman system and carried the same names . Any change in Ottoman mints dictated change of Egyptian mints . The only feature that distinguished the Egyptian coins from the Ottoman ones was the phrase Minted in Egypt . The continuous predominance of the Ottoman Sultans was only cut short upon the revolution of Ali Bek El-Kebir 1183 – 1186 AH / 1769-1772 AD and the French campaign un Egypt 1213-1216 AH / 1798 – 1801 AD