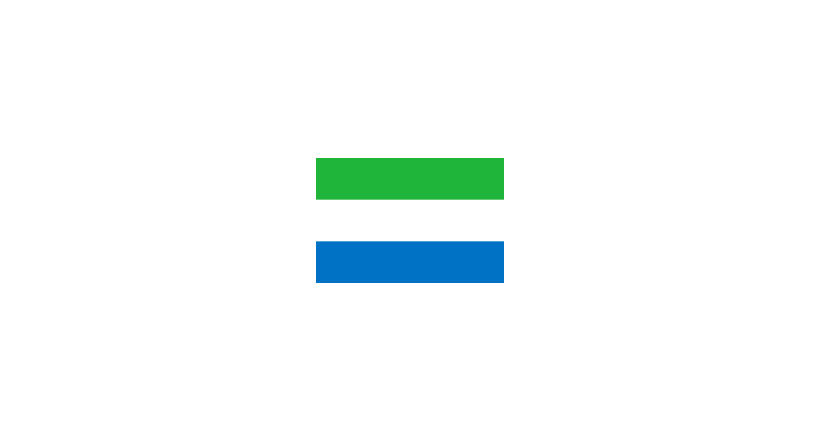 Sierra Leone ), officially the Republic of Sierra Leone, informally Salone, is a country on the southwest coast of West Africa. It is bordered by Liberia to the southeast and Guinea to the northeast. Sierra Leone has a tropical climate, with a diverse environment ranging from savanna to rainforests, and a total area of 71,740 km2 (27,699 sq mi) and a population of 7,075,641 as of the 2015 census. The capital and largest city is Freetown. Bo is the second largest city in the country, and is located 150 miles from Freetown. Sierra Leone is divided into five administrative regions, which are further subdivided into sixteen districts.

On April 29, 1992, a group of Junior soldiers in the Sierra Leone Army lead by a 25 year old Captain Valentine Strasser overthrew President Momoh, and Sierra Leone was under Military rule from 1992 to 1996 during the civil war. Sierra Leone returned to a democratically elected government when the military Junta under Brigadier General Julius Maada Bio who had ousted Strasser in a coup in 1996, handed the presidency to Ahmad Tejan Kabbah of the SLPP after his victory in the 1996 Sierra Leone presidential election. However, on May 25, 1997, the Sierra Leone military overthrew President Kabbah in a coup and Major General Johnny Paul Koroma became the country's Head of State. However, in February 1998, a coalition of West African Ecowas armed forces led by Nigeria reinstated President Kabbah by military force, and the leaders of the coup were executed after they were sentenced to death by a Sierra Leone military court. In January 2002, President Kabbah announced the ending of the civil war with the help and support of Ecowas, the British government, the African Union, and the United Nations. Sierra Leone has had an uninterrupted democratic government from 1998 to present.

Sixteen ethnic groups inhabit Sierra Leone, each with its own language and customs. The two largest and most influential are the Temne and Mende. The Temne are predominantly found in the northwest of the country, and the Mende in the southeast. Comprising a small minority, about 2%, are the Krio people, who are descendants of freed African-American and West Indian slaves. Although English is the official language, used in schools and government administration, Krio, an English-based creole, is the most widely spoken language across Sierra Leone. Spoken by 98% of the population, Krio unites all the ethnic groups in the country, especially in their trade and social interaction.

Sierra Leone is a Muslim-majority country 77%, with an influential Christian minority at 22%. Sierra Leone is regarded as one of the most religiously tolerant states in the world. Muslims and Christians collaborate and interact with each other very peacefully, and religious violence is very rare. The major Christian and Muslim holidays are officially public holidays in the country, including Christmas, Easter, Eid al-Fitr and Eid al-Adha.

Sierra Leone has relied on mining, especially of diamonds, for its economic base. It is also among the largest producers of titanium and bauxite, is a major producer of gold, and has one of the world's largest deposits of rutile. Sierra Leone is home to the third-largest natural harbour in the world. Despite this natural wealth, 53% of its population lived in poverty in 2011. Sierra Leone is a member of many international organisations, including the United Nations, the African Union, the Economic Community of West African States (ECOWAS), the Mano River Union, the Commonwealth of Nations, the African Development Bank and the Organisation of Islamic Cooperation.