Coat of arms of Norway 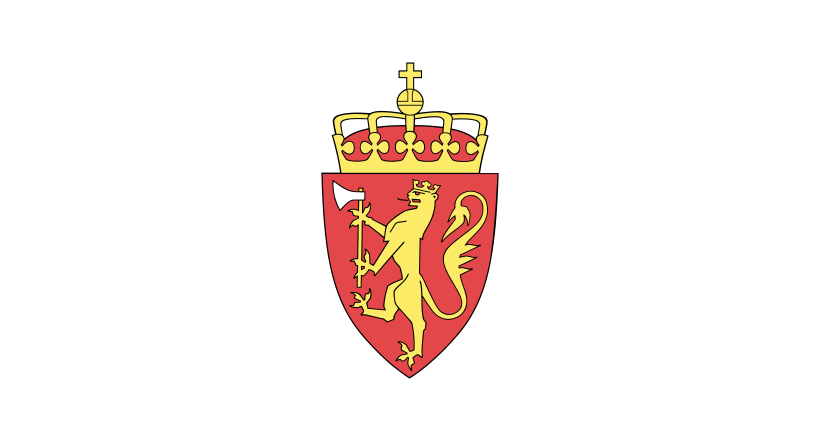 The coat of arms of Norway is a standing golden lion on a red background, bearing a golden crown and axe with silver blade (blazoned Gules, a lion rampant Or, crowned Or, holding an axe Or with a blade argent).

The coat of arms is used by the King (including the King's Council), the Parliament, and the Supreme Court, which are the three powers according to the Constitution. It is also used by several national, regional, and local authorities that are subordinate to the aforementioned, for example the County Governors and both the district courts and the courts of appeal. Since 1905, two parallel versions exist: the more elaborate version used by the King and the simpler one used by the State. The arms in banner form serve as basis for the monarch's flag, known as the Royal Standard.

In addition, there are former and existing lands (e.g. the Earldom of Iceland and the Orkney Islands), cities (e.g. Kristiansand), organisations (e.g. the Museum of Cultural History), companies (e.g. Adresseavisen), and families (e.g. the Counts of Gyldenløve and Gudbrand Gregersen) who have been granted the right to bear the coat of arms or derivations of this. Unless officially granted, it is illegal to use the coat of arms.

The arms has its origin in the 13th century, at first just as a golden lion on a red shield, with the silver axe added late in the century, symbolising Olaf II as the Eternal King of Norway. In origin the arms of the Sverre dynasty, the coat of arms became quartered with that of the Bjälbo dynasty when the Sverre lineage was extinct in 1319, and the Sverre coat of arms figured as part of the further divisions of the coats of arms of Norwegian kings during the early modern period.

The Sverre coat of arms was regarded as representing the Norwegian monarchy in the late 15th century, and it came to be used to represent Norway on coins and in seals during the union with Denmark (1523−1814) and the 19th-century personal union with Sweden, its 13th-century origins placing it among the oldest state coats of arms which remain in contemporary use. The axe tended to be depicted as a curved pollaxe or halberd from 1500 until 1844. The 1844 design approved by king Oscar I reverted to the depiction of a battle-axe as shown in medieval designs.

After the dissolution of the union with Sweden in 1905 a medieval-type escutcheon and charge was designed by Eilif Peterssen. Peterssen's design would be used until 1937 when it was re-designed by state archivist Hallvard Trætteberg, resulting in a markedly different, more simplified design style. Peterssen's design has, however, been retained in the Royal Standard and coat of arms.

The Lion of Norway (Den norske løve) has been a popular and embraced symbol for centuries. This popularity is, not least, visible in older folk art.