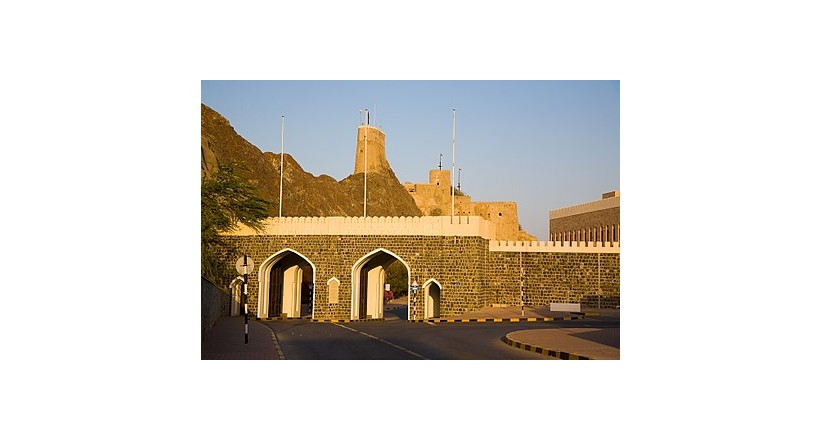 The Portuguese built a shipyard and stronghold at sea level in 1019 AH / 1610 CE and provided it with a low-level cannon battery to prevent an attack from boats sailing near the shore below the cannons of the castle of Mirani.

There is inscription in Portuguese engraved on the south-east wall of the lower back yard towards the port, and this inscription seems to have been changed probably after 1050 AH / 1640 AD when Portugal became independent from Spain.

The Meyrani or Capitan castle was always considered one of the most important forts. Miles stated that the Portuguese ruler in Muscat, Martino Afonsodi Melao, lived there in 1032 AH / 1623 AD when the weather was warming, although he lived most of the year in the compound of Greez down the castle. The walls of the city of Muscat were rebuilt, a new customs headquarters was built and towers were also constructed in the Kalbouh, Riam and Sadab passageways.

From the contemporary painting by De Risenda, it appears that the scheme of fortifications is similar to the design of the present fort, and does not show some features such as high towers, but instead show fortified fortifications. Imam Ahmed bin Said had built a tower here in the late 13th century AH / 19th century AD It is possible that the other towers were the result of later modifications. The drawing by the Portuguese artist indicates a rectangular central area surrounded by walls that follow the rocky edge in the northeastern side. The leader's headquarters appears in two floors and includes a tower painted with lime or plaster. The small, circular-shaped church with a small dome is adjacent to the eastern wall, and the long wall and the narrow, clearly marked bastion on the western rocky edge are part of the original structure. It was a semi-circular stronghold located at sea level.

What is now linked to the castle Mirani garrison of the Sultan's armed forces and used as a military barracks and the castle includes many old cannons.