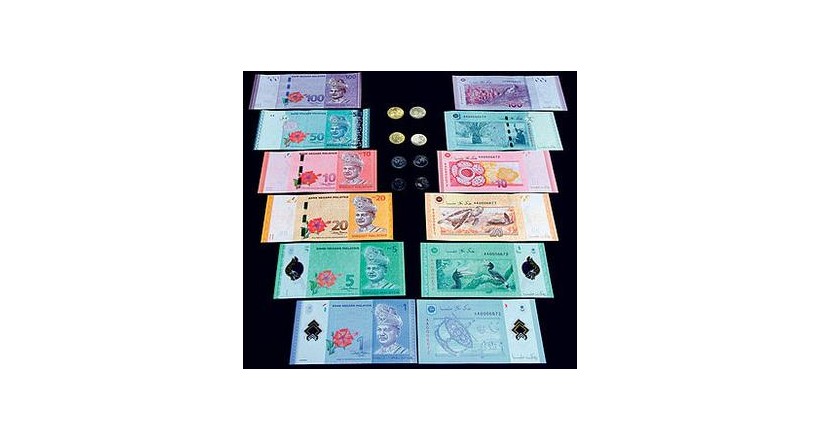 The Malaysian ringgit: is the currency of Malaysia. It is divided into 100 sen (cents). The ringgit is issued by the Bank Negara Malaysia.

The word ringgit is an obsolete term for "jagged" in Malay and was originally used to refer to the serrated edges of silver Spanish dollars which circulated widely in the area during the 16th and 17th century Portuguese colonial era. In modern usage ringgit is used almost solely for the currency. Due to the common heritage of the three modern currencies, the Singapore dollar and the Brunei dollar are also called ringgit in Malay (currencies such as the US and Australian dollars are translated as dolar), although nowadays the Singapore dollar is more commonly called dolar in Malay. To differentiate between the three currencies, the Malaysian currency is referred to as Ringgit Malaysia, hence the official abbreviation and currency symbol RM. Internationally, the ISO 4217 currency code for Malaysian ringgit is MYR.

The Malay names ringgit and sen were officially adopted as the sole official names in August 1975. Previously they had been known officially as dollars and cents in English and ringgit and sen in Malay, and in some parts of the country this usage continues. In the northern states of Peninsular Malaysia, denominations of 10 sen are called kupang in Malay and called pua̍t (鏺/鈸) in Penang Hokkien which is thought to be derived from the Thai word baht. e.g. 50 sen is lima kupang in Malay and gōo-pua̍t (五鏺/鈸) in Hokkien.