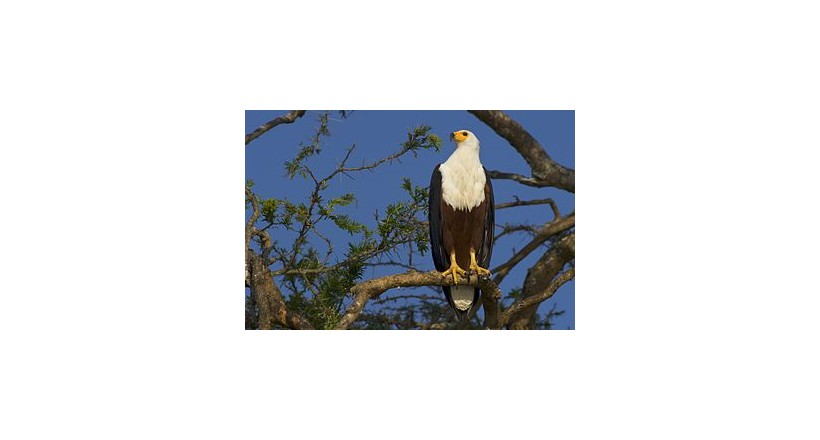 The African fish eagle (Haliaeetus vocifer), or to distinguish it from the true fish eagles (Ichthyophaga), the African sea eagle, is a large species of eagle found throughout sub-Saharan Africa wherever large bodies of open water with an abundant food supply occur. It is the national bird of Namibia, Zimbabwe, Zambia, and South Sudan. As a result of its large range, it is known in many languages Examples of names include: visarend in Afrikaans, nkwazi in Chewa, aigle pêcheur in French, hungwe in Shona, inkwazi in isiZulu, and 'ntšhu' (pronounced "ntjhu") in Northern Sotho. This species may resemble the bald eagle in appearance; though related, each species occurs on different continents, with the bald eagle being resident in North America.The African fish eagle is a species placed in the genus Haliaeetus (sea eagles). Its closest relative appears to be the critically endangered Madagascar fish eagle (H. vociferoides). Like all sea eagle species pairs, this one consists of a white-headed species (the African fish eagle) and a tan-headed one. These are an ancient lineage of sea eagles, and as such, have dark talons, beaks, and eyes Both species have at least partially white tails even as juveniles. The scientific name is derived from Haliaeetus, New Latin for "sea eagle" (from the Ancient Greek haliaetos), and vocifer is derived from its original genus name, so named by the French naturalist François Levaillant, who called it 'the vociferous one'.The African fish eagle is a large bird, and the female, at 3.2–3.6 kg (7.1–7.9 lb) is larger than the male, at 2.0–2.5 kg (4.4–5.5 lb). This is typical sexual dimorphism in birds of prey. Males usually have wingspans around 2 m (6.6 ft), while females have wingspans of 2.4 m (7.9 ft). The body length is 63–75 cm (25–29.5 in). The adult is very distinctive in appearance with a mostly brown body with a white head like the bald eagle and large, powerful, black wings. The head, breast, and tail of African fish eagles are snow white, with the exception of the featherless face, which is yellow. The eyes are dark brown in colour. The hook-shaped beak, ideal for a carnivorous lifestyle, is yellow with a black tip. The plumage of the juvenile is brown in colour, and the eyes are paler compared to the adult. The feet have rough soles and are equipped with powerful talons to enable the eagle to grasp slippery aquatic prey. While this species mainly subsists on fish, it is opportunistic and may take a wider variety of prey such as waterbirds. Its distinctive cry is, for many, evocative of the spirit or essence of Africa. The call, shriller when uttered by males, is a weee-ah, hyo-hyo or a heee-ah, heeah-heeah