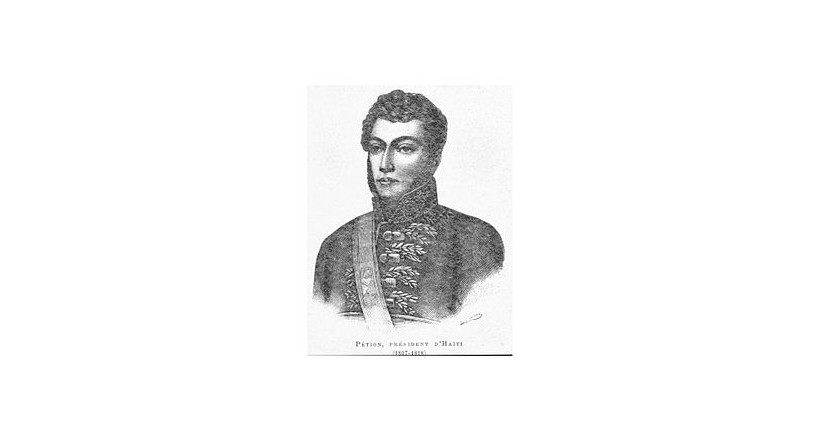 Alexandre Sabès Pétion; April 2, 1770 – March 29, 1818) was the first President of the Republic of Haiti from 1807 until his death in 1818. He is one of Haiti's founding fathers, together with Toussaint Louverture, Jean-Jacques Dessalines, and his rival Henri Christophe.

Pétion was born "Anne Alexandre Sabès" in Port-au-Prince to Pascal Sabès, a wealthy French father and Ursula, a free mulatto woman, which made him a quadroon (a quarter African ancestry). Like other gens de couleur libres (free people of color) with wealthy fathers, Pétion was sent to France in 1788 to be educated and study at the Military Academy in Paris.

In Saint-Domingue, as in other French colonies such as Louisiane, the free people of color constituted a third caste between the whites and enslaved Africans. While restricted in political rights, many received social capital from their fathers and became educated and wealthy landowners, resented by the petits blancs, who were mostly minor tradesmen. Following the French Revolution of 1789, the gens de couleur led a rebellion to gain the voting and political rights which they believed were due them as French citizens; this was before the slave uprising of 1791. At that time, most free people of color did not support freedom or political rights for enslaved Africans and free blacks.

Pétion returned to Saint-Domingue as a young man to take part in the Créole expulsion of the British from Saint-Domingue (1798–99). There had long been racial and class tensions between gens de couleur and enslaved Africans and free blacks in Saint-Domingue, where slaves outnumbered whites and gens de couleur by ten to one. During the years of warfare against planters or grand blancs, Spanish, English, and French racial tensions were exacerbated in competition for power and political alliances.

When tensions arose between blacks and mulattoes, Pétion often supported the mulatto faction. He allied with General André Rigaud and Jean-Pierre Boyer against Toussaint L'Ouverture in a failed rebellion, the so-called "War of Knives", in the South of Saint-Domingue, which began in June 1799. By November the rebels were pushed back to the strategic southern port of Jacmel; the defence was commanded by Pétion. The town fell in March 1800 and the rebellion was effectively over. Pétion and other mulatto leaders went into exile in France.

In February 1802, General Charles Leclerc arrived with tens of warships and 82,000 French troops to bring Saint-Domingue under more control. Gens de couleur Petion, Boyer and Rigaud returned with him in the hope of securing power in the colony.

Following the French deportation of Toussaint Louverture and the renewed struggle, Pétion joined the nationalist force in October 1802. This followed a secret conference at Arcahaie, where Pétion supported Jean-Jacques Dessalines, the general who had captured Jacmel. The rebels took the capital of Port-au-Prince on October 17, 1803. Dessalines proclaimed independence on January 1, 1804, naming the nation Haiti. On October 6, 1804, Dessalines declared himself ruler for life and was crowned emperor.