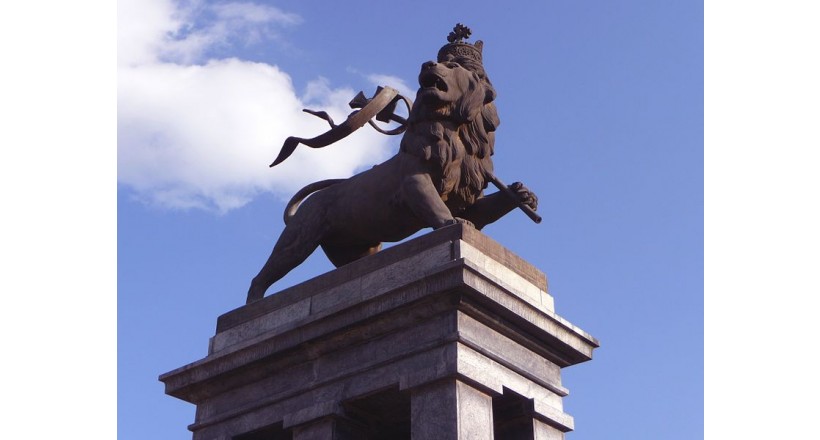 The Lion of Judah (Hebrew: אריה יהודה Aryeh Yehudah) is a Jewish national and cultural symbol, traditionally regarded as the symbol of the Israelite tribe of Judah. According to the Torah, the tribe consists of the descendants of Judah, the fourth son of Jacob. The association between Judah and the lion can first be found in the blessing given by Jacob to his son Judah in the Book of Genesis.

The Lion of Judah is also mentioned in the Book of Revelation, as a term representing Jesus, according to Christian theology. The lion of Judah was also one of the titles of the Solomonic Emperors of Ethiopia. It was depicted on a map of the Upper Nile published in 1683 by the Italian Jobi Ludolfi describing the Lion of Judah symbol as the Royal Insignia of the Ethiopian empire. The Solomonic dynasty of Ethiopia claims to have its patrilineal origin in the Israelite Royal House of Judah. The Lion of Judah served as the hereditary title of the Solomonic Ethiopian emperors including Menelik and Haile Selassie and was depicted on the flag of Ethiopia from 1897 to 1974. Due to its association with Haile Selassie, it continues to be an important symbol among members of the Rastafari movement. history and usage

The biblical Judah (in Hebrew: Yehuda) is the eponymous ancestor of the Tribe of Judah, which is traditionally symbolized by a lion. In Genesis, the patriarch Jacob ("Israel") gave that symbol to this tribe when he refers to his son Judah as a Gur Aryeh גּוּר אַרְיֵה יְהוּדָה, "Young Lion" (Genesis 49:9) when blessing him. In Jewish naming tradition the Hebrew name and the substitute name are often combined as a pair, as in this case. The Lion of Judah was used as a Jewish symbol for many years, and as Jerusalem was the capital of the Kingdom of Judah, in 1950 it was included in the Emblem of Jerusalem.