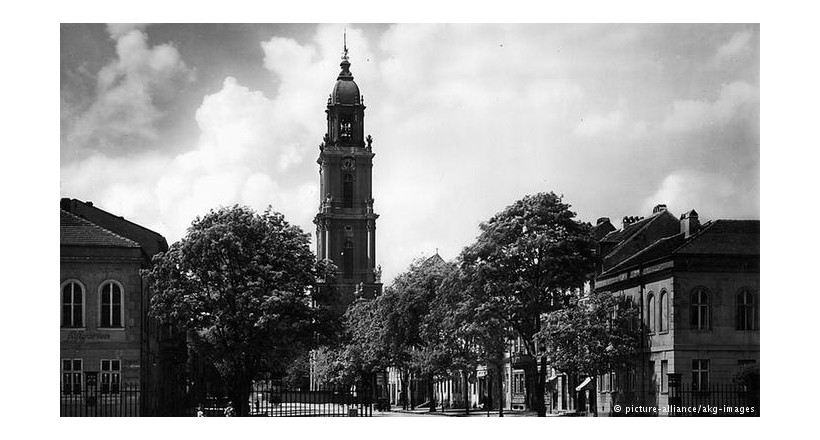 The Garrison Church (full name: Court and Garrison Church Potsdam, German: Hof- und Garnisonkirche Potsdam) was a Protestant Baroque church in Potsdam. It was a parish church of the Prussian royal family until 1918. Originally built as a Calvinist church for Prussian monarchs, it became a United Protestant church with both Calvinist and Lutheran participation after the Prussian Union of Churches in 1817.

The architect Philipp Gerlach was commissioned by king Friedrich Wilhelm I. to build the church for members of the court and for the soldiers garrisoned in Potsdam. It was consecrated on August 17, 1732 and was soon well-attended by both the civilian and military communities. Friedrich Wilhelm I was buried at his request in the crypt of the church in 1740. In 1786 his son, Frederick the Great, was buried there also, but against his will.

History can hardly happen in a more compact form than here: Both Czar Alexander I and Napoleon visited Frederick II's grave. It was here that the first freely-elected Potsdam City Parliament met and the Lutheran and Reformed Churches celebrated their union. The Nazis used the church for their Day of Potsdam, and many members of the 20th July conspiracy and their families worshiped there.

The nave and bell tower were destroyed by fire during an air raid in the night from April 14 to April 15, 1945. Only the outside walls remained standing. In 1950 the Holy Cross Chapel was built within the cruciform walls of the bell tower. A new congregation met there for services until on a summer Sunday in 1968, the GDR head of state Walter Ulbricht and his Communist Party ignored widespread protests and ordered the remaining walls left standing to be torn down. In its place, in 1971 a Computing Center was built. The remaining empty space continues to demand an important community effort to rectify.

The Garnisonkirche is a monument of national importance; a place of learning, a workshop for the advancement of freedom an reconciliation and today should be a city symbol. Since 2004 it belongs to the International Community of the Cross of Nails (founded in Dresden, Germany in February 1991).

In 2004 a group of highly motivated citizens formed the Promotion Committee for the Reconstruction of the Garrison Church, a non-profit organization. In June 2008 followed the Garnisonkirche Potsdam foundation. Both organizations work together for the reconstruction of the Garrison church Potsdam not only as a parish church for its citizens but also as a reminder that future German-European cooperation is possible and essential. In 2013 the German National Committee for Cultural and Media Affairs named the Garrison church Potsdam an important cultural monument and offered 12 million Euro towards the funding of its reconstruction.