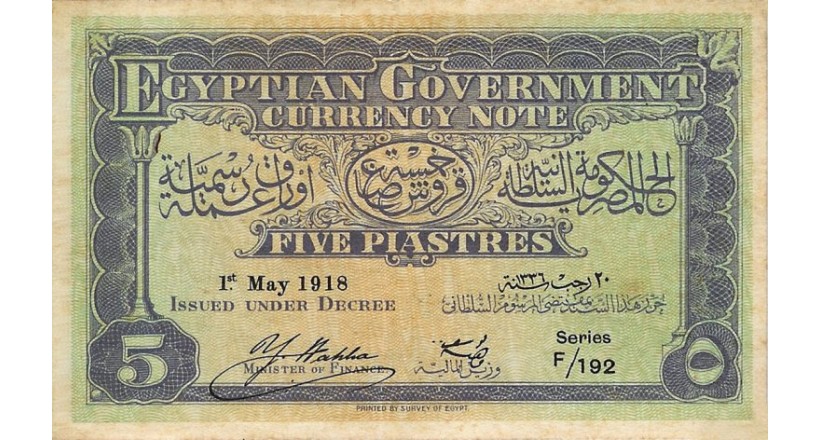 Issuing currency notes (The Five and Ten Piastres) in Egypt

The issuing of the currency notes of 5 and 10 Piastres in Egypt, for the first time, was linked to

some crises that the country witnessed, and which were accompanied with a severe lack of metals

used in minting coins of 5 and 10 Piastres .. .Four phases marked the issuing of such notes :

The first appearance of currency notes in Egypt was during the first World War, in the reign of

Sultan "Hussein Kamel" The circumstances of war made it so difficult to import metals to Egypt,

used in minting coins. In such circumstances the real value of coins became higher than their nominal

one. The merchants and silversmiths took advantage of the situation and started melting the coins to

benefit from their real value of the metal. The lack of coins currency becoming even more severe, the

government had to issue currency notes of 5 and 10 piastres to keep the markets working. These issues

were printed in" De La R ue" press in London in 1916, That was before the issuing by government of

effect. However these bills were easy to forge, due to the bad quality of paper, so the government

withdrew it from circulation, redesigned it, and reprinted it in "Bradbury Wilkinson & Co." Press in

London, on a high quality paper. These were dated June the 1st, 1918

After the war, the government stopped issuing those notes, but they remained in circulation till

1926 when the Ministers' Cabinet decided to stop their use and took them out of circulation, on the

The Same Reasons that made the government issue currency notes in WWI, made it issue

authorizing the issuing of 5 and 10 piastres currency notes.

The 10 Piastres notes were printed in brown, with the landscape of the Nile and Citadel on the

back of the note. The 5 piastres note, on the other hand, was printed in green, with a scene of the Aswan

dam on the back. Both were printed in the "Survey of Egypt", with no watermark. The 10 piastres was

later withdrawn from circulation, again due to instances of forgery, and was then reprinted, with the

same design, but on a better quality paper, and with a watermark for the first time; complicated

geometrical designs were added to the back of the paper, to make it harder to forge.

In 1942,a new design for both notes was introduced. The face of the 10 piastres having now the

Kiosk of Emperor "Trajan", the 5 piastres on have the mosque of "Khayer Bek" instead. Both bills

were printed in the "Survey of Egypt press, on a special paper bearing the water mark of the repeated

motifI [the Royal crown and the leter ( ف )

In 1944, the design of the 1o piastres bill was changed again. The portrait of King "Faruk I"

figured on its face for the first time Shortly after that, it appears on the 5 piastres too. Those notes

bearing the portrait of King Faruk" remained in circulation till the eruption of the 1952 revolution.

The issuing of both notes went on, shortly after the revolution. However the government changed the design completely, so it goes in harmony with the new ideology of the revolution.

Since then, up till now, the 5 piastres note bears a picture of the head of Queen "Nefertiti" on its

face. The only changed appeared in the name of the country. The design of the face of the 10 piastres

note, however, represented a panorama of all the groups forming the Egyptian community. Thus we see

a soldier with rifle; a peasant with an ax in hand; a worker with wrench; two women, one in an Egyptian

outfit, the other in a Sudanese one, symbolizing the unity of the Nile valley; and the Egyptian old flag

(the crescent and three stars) on the background..

The 5 and 10 piastres notes were issued in the name of the "Egyptian State", and printed on paper

already prepared before the revolution, and bearing the watermark of king Faruk's portrait. This

watermark was duly and carefully covered, so as to disappear, under the design motifs.

After this stock of paper was al used up, new paper was used. The watermark as well as the

name of the country changed several times, according to diferent political events.

The currency notes were at first printed and numbered in the "Survey of Egypt";then the "Post

Service" press look the responsibility of printing the 5 piastres notes, while the printing of the 10 piastres remained at the "Survey Authority" with the Rail Way press being now responsible for numbering and scissoring both notes.

The policies committee decided, in1989, to stop currency notes, and took it out of circulation; favoring the total dependence on coins.

Behind this decision was a feasibility study commissioned by the committee. According to this study,

the cost of both, the currency notes, and the coins is 3 piastres; but, while the life time of the first is

On the 2nd of April. 1997,the Ministers Cabinet agreed on the reprinting of the currency notes

The 5 and 10 piastres notes were reprinted again, starting 1998, at the "Post service" and

However a fatal mistake occurred in the 5 piastres bill: old zink plates were used; they bore the

signature of a former minister of finance "Salah Hamed" in English: the face of the paper, however,

bore the signature of the then minister of finance "Mohey El Din El Gharib" in Arabic To solve the problem the Central Bank was commissioned the printing of the currency aoies of 5 and 10 piastres, due to the high-tech of his press.

Thus the Central Bank Press became the only party responsible for printing all paper money in Egypt, from the 5 piastres bill, to the 100 pound one.

by the Egyptians), and the 10 Piastres as "Bariza".

The Egyptian "Rial" was equivalent to 4 English Shellings. The "Rial" was also 20 Egyptian Piastres, so it was fair enough to call the 5 Piastres note: Shelling (or Sheln) As for the word "Bariza", the popular name of the 10 Piastres currency note, it came from the word "Paris", capital of France (pronounced by the commoners: Baris or Bariz), and the French word for 10 (Dix). Both words were combined in the Egyptian tongue to form "Bariza" meaning 10 Piastres.