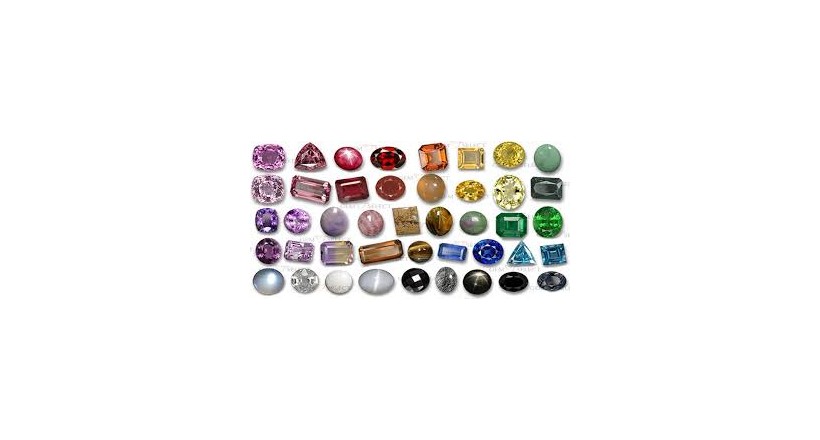 Precious or precious stones , precious or refined [1] are different types of polymers composed of two or more elements, consisting mainly of silica with some mineral impurities. The type of gemstone differs according to the constituent material in addition to the silica, Volcanic volcanoes, especially in volcanic river run-off areas.

The composition of each gemstone differs from the other in terms of the conditions , constituents and the type of impurities involved during the basic installation processes. The crystalline netting system, which is composed of most of the main gemstones, is similar among these stones. Which distinguishes one stone from the other is the elements of interference during the emergence and formation of the rapid crystalline, which replicates the habit, format and style of the center of the nucleus at the beginning of the polymerization process and vary in color according to the degree of transparency resulting from several factors including the type of metals that enter as impurities on the silicon and therefore a large and varied number of precious stones As a result, it should be noted that all types of gemstones are made up of two elements, except diamonds .

Some gems are formed in the ground at different depths, and may combine with other elements or are in a free form, such as sapphires, emeralds and diamonds , sometimes found at a depth of about 160 meters, and come out within the lava and the result of earthquakes . Others are in the animal kingdom where they are extracted from the seabed, such as coral and pearl, which was one of the most beautiful and precious gemstones of the past, especially Gulf pearls , which has gained a global reputation. The kingdom also gives us the beautiful yellow amber .

Gems in the language

Gems in the languaThe term "Gemstones" in English , which is composed of two words and synonyms in Arabic , means "precious stones" or the equivalent in other languages. It means that the natural stones that are formed in the earth are not connected to man in their composition at all. They extract them from the earth, such as diamonds, sapphires, Emerald . It was used by man for decoration or worship or worshiped for reasons we will address in the subsequent parts, but in this part we will talk about gemstones in terms of the science of the origin of speech and will address the beginning of the science of origin "Gemstones" in English, and since English is divided in terms of origin into two parts Ancient English, a period that began almost 450 years before Christ and continued until the twelfth century after Christ and is derived from Western Germanic languages ​​and was strongly influenced by the Norwegian language, such as the heroic poem in Old English

The gemstones captured the human mind and heart ten thousand years ago, characterized by natural forces miraculous associated with the social obsession of social and mainly subjects that were not limited to the issues of social relations at the beginning, the discovery of many precious stones today, such as emeralds and sapphires and exhaling, diamonds are the evil that He gave his thought to be far more realistic and devoid of philosophical and metaphysical reflections; on the contrary, its physical properties dominated his mind and thought, and because of his inability to interpret these phenomena he used the imaginary elements - sometimes The aim of creating the element of thrill and excitement in the weaving of the myth, which was sometimes characterized by simplicity, and was walking in a single linear direction and maintain a logical sequence, flowing in real time and place, and has an educational message, Others took it and did not understand it, and it is certain that these myths were written in a more mature stage of thought and paper, making them synonymous with human concepts and higher values ​​such as the reward of treachery, virtue of charity, harm of envy, which contain symbols that require interpretation, Gods, created Temples and appointed priests and servants of those monuments.

Humans have known gemstones and gems about 40 thousand years ago , and primitive human days used in the manufacture of contracts and amulets and ornaments , and makes them hard to head for arrows fishing !. Dr. Zakaria Hamimi says in his book "Encyclopedia of Gems": The man began gradually to use many types of precious stones and began the processes of refining and cutting, polishing, polishing and shaping in the form of necklaces mimic some of the vocabulary of nature, as revealed by some necklaces and Babylonian contracts found on The banks of the Euphrates River, which date back to 5000 BC, are made of Opsidian (volcanic rock), some natural rocks, some shells and oysters .

Gems in Beliefs and Religions

The mention of gemstones in all the religions and beliefs of the earth without exception is one of the oldest beliefs known by the human " Buddhism " to the last religions of heaven, " Islam ", those religions have mentioned the precious stones with precision or honor and these symbols is inspired cosmic wisdom. Her central ideas are expressed in an exceptional and theosophical light. Their ideas, which were spiritually and organically linked to these stones, appeared. The Mundaean cosmology refers to the Supreme Being as "honoring and maximizing precious stones" which are described as peculiar and unique in denial, in the sense that they are far from being understood as being superfluous. Because of its ambiguity and abstraction, the Mandaeans always speak of it in neutral terms (stones). They are natural stones made up in the ground that have no human being in their composition at all, and are extracted from the earth, such as diamonds , sapphires, emeralds and emeralds . The mention and description of some precious stones in the Holy Quran said: " The pearls and coral are coming out of them ." Surat Al-Rahman describes the Glory of Heaven as the sky of sapphires and coral .

Precious stones are made up of natural minerals during geological processes called "precious stones". Artificial stones resulting from a series of industrial chemical laboratory processes are called imitation and fake stones. The word is not only on the chemical compound , but also on the metal construction. The metals in the composition vary from pure elements and simple salts to highly complex silicate compounds in thousands of known formulations. These processes are known as chemical composition, known as the chemical formula or formula, and are not impurities within that formula, The impurities are the cause of the color of that gemstone. See crystal grids in gems .

The gemstone is distinguished by its physical properties such as durability , scarcity , color , hardness or hardness . These measurements are scientific confirmations of the quality of the stone . The diamonds occupy the first place, then sapphires , emeralds , sapphires , or pearls on the last hardness scale. Pearl colors vary according to the surrounding environment, and are measured in purity, size and regularity, and black is considered more expensive than white for its splendor.